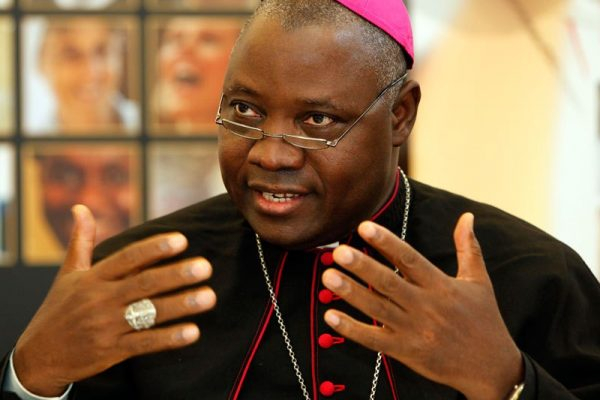 Kaigama disclosed this while stating his position on the face-off between the Spiritual Director of the Adoration Ministry in Enugu and the President Muhammadu Buhari-led government.

The Presidency had claimed last week following Mbaka’s call for Buhari’s resignation or impeachment over insecurity that the cleric was aggrieved because Buhari refused to grant him contracts.

Presidential spokesman, Garba Shehu suggested that Mbaka has jumped the Buhari ship because Buhari turned him down, when he visited him, demanding contracts.

Mbaka later admitted that he led three men to President Muhammadu Buhari for contracts during his first term.

Kaigama while speaking to the press at a conference on the 2021 World Communications Day celebration reminded Mbaka of the Canon Law 285.

The law prohibits the clergy from engaging in anything that is strange and unbecoming to the Catholic clerical state.

The bishop said Mbaka, being a catholic priest took an oath during his ordination which reads: “I promise obedience and respect to you my local ordinary and your successors”.

Kaigama noted that the oath Mbaka publicly took, like other priests, remains valid till he dies.

The bishop insisted Mbaka must abide by what the Catholic church teaches and stands for.

Citing the Canon Law 285, Kaigama said priests are “prohibited from embarking on anything alien to our clerical status and what the Catholic church teaches us, we are not allowed to dabble into politics.

“It doesn’t mean we can’t be prophetic in condemning criminality and corruption, we can do that, that is a prophetic mission.

“Partisan politics is not part of our calling. If a clergy embarks on such unbecoming and foreign conduct, the church has a solution and the church knows what to do.”