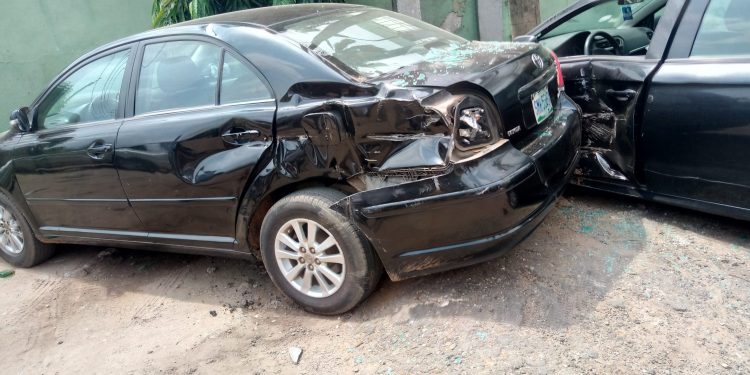 Damaged vehicles on the road: Third Party Insurance for review

A drunk truck driver who identified himself as Sunday John ran the big vehicle which carried a container on cars parked in front of LASACO Plc building on ACME Road, Ogba Lagos State around noon on Friday.

The 39-year old John was said to have dozed off while driving.

According to eye witness accounts, he was on high speed and had gotten close to a pothole at the spot before he realized, making it difficult for him to control the vehicle.

His belated attempt to dodge the pothole led to the truck veering off the road and ramming into the parked vehicles.

Some school children were said to be walking along the road at the time of the accident. Thinking he had killed the children, he ran with the vehicle to escape.

It took the combined effort of some passers-by and the school children who ran after him and signalled to the Lagos State Transport Management Authority (LASTMA) officers who were controlling traffic at the First Gate Bus-stop along Lateef Jakande Road to intercept and apprehend him.

When asked why he drove the vehicle off the road, he said he didn’t realize on time that he had gotten near a pothole. He could also not deny being drunk because he was reeking of alcohol at the time.

Police officers from the Area ‘G’ Command, Ogba who had been invited to the scene by LASACO Plc took John and the trailer to their command to continue investigation on the incident.

However, his employer who owns the trailer truck was yet to appear at the police station as at the time of filing this report.