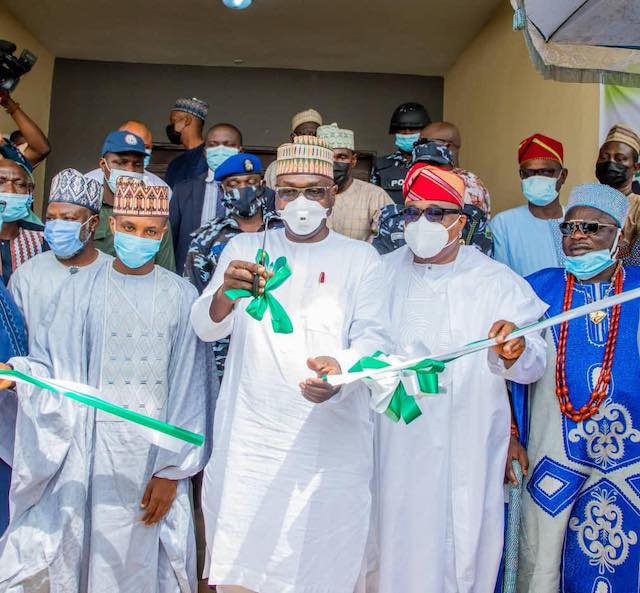 AbdulRahman AbdulRazak commissions the auditorium at Kwara Poly for use

At the launch of the auditorium, AbdulRazaq reiterated his commitment to ensure that all abandoned projects funded with tax-payers money were fixed in phases within available resources.

“The construction of this auditorium started over 19 years ago. It got stalled on the altar of politics of who conceived what.

“In 2019, I pledged not to let Kwara be a mortuary of abandoned projects.

“The commissioning of this facility is, therefore, a fulfilment of that pledge,” AbdulRazaq said at the state polytechnic, Ilorin.

The governor said the present administration was determined to set new, people-focused priorities and make public funds work for the public.

“God willing, we will do our best to complete all abandoned projects as resources may permit.

“This is because allowing them to rot away is a waste of public funds already invested in the projects and an abuse of public trust.

“As we have funded this auditorium to a befitting completion, projects like the Osi and Ilesha Baruba campuses of Kwara State University, which we inherited, will be funded to completion.

“This is developmental politics,” he said.

AbdulRazaq also announced the approval of another round of scholarships to boost the morale of hardworking students.

“I urge our students and youths to reciprocate our investments in education and other areas of human capital development, by being good ambassadors to their respective homes and our state.

“I’m glad to announce to you that I have approved another round of scholarships to boost the morale of our hard-working students.

“The Ministry of Tertiary Education will give the details in subsequent communications,” he said.

“I appeal to our young people to shun cultism and drug abuse. I urge you to be the best that Kwara people will be proud of.

“And on our part, we will never spare any available resources to ease your path to the top,” he said.

Mr Senior Sulyman, the Commissioner for Tertiary Education, Science and Technology, called on the management of the polytechnic to take proper care of the auditorium, so that the colossal sum of money sunk into the project does not go down the drain under few months.

“The story of this auditorium will be incomplete and grossly inadequate without the mention of the special interest, passion, commitment and strong political will of His Excellency, Governor AbdulRazaq.

“He defied all odds to break the jinx and ensured that the project is completed and ready for use, through constant and up-to-date release of funds to the contractor.

“We also owe our gratitude to the contractor, Alhaji Abdulraheem Oladimeji, the Jagunmolu of Igbomina land, for his patience in the last 20 years,” he said.

The Rector of the polytechnic, Dr Abdul Jimoh, said the auditorium would solve some of the infrastructural challenges facing the institution.

“The auditorium will go a long way in solving some of our challenges. For instance, we used to hold our matriculation and convocation ceremonies in an open field, which is not befitting enough.

“With this auditorium, we will be able to confidently hold our matriculation and convocation ceremonies and some other important functions in the institution.

“The structure was conceived during the late Rear Admiral Muhammad Alabi Lawal administration, on Sept. 7, 2001, but suffered lack of funding from previous governments.

“We thank God that the people’s governor, Mallam AbdulRahman AbdulRazaq intervened, and the result is what we’re seeing today,” he said.

Oladimeji, on his part, lauded AbdulRazaq for his intervention in completing the project, nearly 20 years after laying the foundation.

The governor, meanwhile, also pledged to investigate the challenges confronting the students in the school, such as the light up project and the dam of the school.

In a brief meeting with the Students’ Union Government (SUG) executives of the school, the governor called on the students to continue to be of good character, saying the administration will always support them.

Mr Obafemi Isaac, the President of the SUG, commended the governor for his pro-people programmes.

He noted that one of such programmes was his recent waiver for students who were yet to pay their tuition in the school to sit for their examinations while they pay up later.