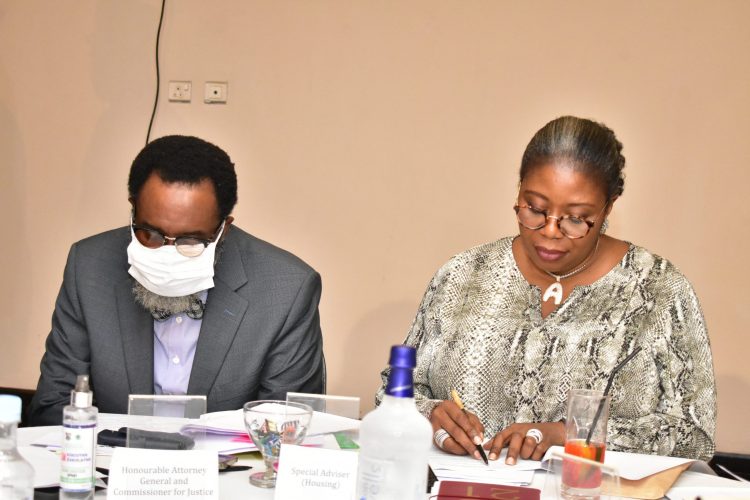 The Lagos State Government has assured financial institutions, including banks that there will be returns on their investments in Mortgages in the State, following the amendment of the Lagos State Mortgage and Property Law.

The Special Adviser to the Governor on Housing, Mrs Toke Benson-Awoyinka, made this known Wednesday, at Wheatbaker Hotel in Ikoyi, Lagos, during a roundtable discussion on the incorporation of Foreclosure Law into the Lagos State Mortgage and Property Law.

She said that the round table discussion was not only initiated to safeguard the development of the real estate sector in the State but, also to ensure professionalism and global best practice.

The Lagos State Mortgage and Property Law, according to her, seeks to encourage growth in Real Estate and regulate consumer loans for property realisation in the State.

“This Mortgage and Property Law, seeks to create conducive environment for accessible and affordable mortgage for the benefit of people of the State to acquire their own homes by paying a certain percentage of the cost of the unit and paying the balance over a period of years whilst residing in the property.

“The proposed amendment Bill, when signed to Law, will include sale by public auction, voluntary surrender of mortgaged property in lieu of foreclosure, and foreclosure in default of payment of mortgaged amount.”

Benson-Awoyinka stated that the Lagos State Governor, Mr Babajide Sanwo-Olu, is keen to develop the sector through proper laid down regulations that would ensure that local and International investors are attracted, and that the highest level of integrity is maintained in the real estate sector.

The Special Adviser informed that Sanwo-Olu has consistently reaffirmed his commitment towards ensuring the provision of affordable and descent accommodation for the citizens of this State, with a view to reduce to the barest minimum the prevailing housing deficit across the State.

She noted that the State Government, in view of the huge housing deficit in the State, adopted multi-dimensional approach to reduce housing deficit to the barest minimum despite the prevailing economy downturn.

Also speaking at the event, the Attorney-General General and Commissioner for Justice, Moyosore Onigbanjo, said that once the law is passed, issues concerning mortgages in Lagos State will be a thing of the past.

Onigbanjo said that with the law amendment, the state is now providing certainty in the law regarding sales of mortgage property and foreclosure, in order to give confidence to the mortgagee who has given out his money, that if there is default, he will be able to realise the security pledged without the undue stress when it comes to litigation.

He urged local and international investors in the real estate sector as well as the financial institutions to look out for the passage of the law, noting that once it is passed, the issues concerning mortgages equity of redemption, foreclosure and sale of mortgage property among others, will be more certain, more predictable, more investor friendly and would protect the vulnerable.

“If banks are sure that they will get back their investment in mortgages, then more mortgages will be given, more homes will be purchased, more houses will be built and at the end of the day, it will be a win-win for Lagos State citizens and the finance industry will be better for it.”

He noted that the gathering which was of all stakeholders in the real estate industry, was to discuss the issue of having foreclosure law for Lagos state, to deal with the issues that arises on mortgages by financial institutions and banks complaining that they cannot realise their security with the law.

“This gathering was also our way to try to pass a law protecting the mortgagee and mortgagor. Useful suggestions have been thrown out and in turn Lagos state citizens, people who apply for mortgage are going to be better for it. It will also help our banks, knowing that when they give out their money it will come back to them in a secure, settle and safe manner.

“The plan with the law amendment is to change the old order and take steps to ultimately lead to a revolution in the real estate industry in Lagos state,” he said.

The Chairman House Committee on Housing, Rasheed Makinde, said the gathering was geared towards finding a robust way of doing business in the real estate sector in Lagos state, adding that the Round Table discussion, aims to make transactions between the financial institutions, mortgage and mortgagor seamless.

“In today’s deliberation, we are able to identify the role and limitation of both the mortgage and mortgagor and the functions of the court so that none of the party will take advantage of the other.

“This meeting has also revealed some of the benefits that the mortgage and mortgagor can enjoy, including the issue of voluntarily surrender. With this gathering, innovations have been made into the law to bring it at par with what obtains in the developed nations of the world. We want to strengthen our law so that it can meet the test of time,” he said.

He stressed the need for enormous investments in real estate, in order to make housing available and affordable, noting that government cannot do it alone and therefore need the private sector, hence the need for such law amendment.

He said housing is a necessity, noting that no effort should be spared in ensuring that it is available and affordable to citizens, either through homeownership or rental.