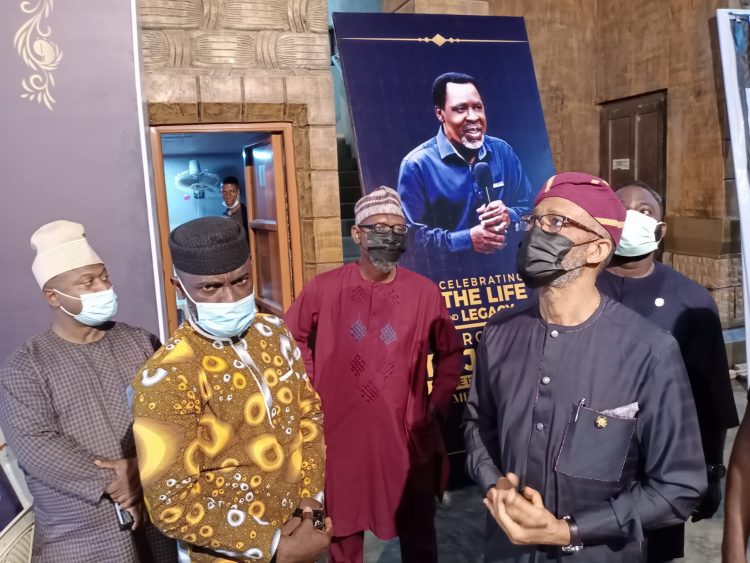 Abayomi and other government officials at SCOAN

A delegation from the Lagos State Government visited the Synagogue Church of All Nations (SCOAN) at weekend to inspect facilities at the church for COVID safety and prevention protocols compliance in preparation for the funeral of its late founder, Prophet Temitope Joshua.

The delegation were led by the Commissioner for Health, Prof. Akin Abayomi and the Director General of the Lagos State Safety Commission, Mr. Lanre Mojola

Speaking after the inspection of the church facilities and meeting with the church officials, Abayomi said the inspection was in line with the third wave mitigation strategy of the Lagos State Government to prevent the importation and spread of new deadly strains of COVID into Lagos and Nigeria.

He noted that the Late Prophet was a prominent person with large congregation and followers from around the world, saying that the funeral rites would expectedly attract people from within and outside Nigeria who would deem it fit to come pay their last respect to the clergy.

Abayomi explained that the Lagos State Government considered the funeral activities at SCOAN an important event enough to ensure strict compliance to COVID safety protocols to prevent the importation, transmission or spread of the newly deadly strains of COVID infection to the State or country.

The commissioner added that the inspection and meeting with officials of SCOAN was at the behest of the Lagos State Governor who directed that SCOAN be given all the support required to host the funeral programme for its late founder under strict COVID prevention protocol to limit any possibilities of introduction of foreign COVID variants among the congregation and by extension to the community.

He said: “On behalf of the Lagos State Government we want to offer our deep condolences to the family of the prophet and members of the congregation. In these very precarious times that we are in, with a global pandemic that is evolving dynamically; what we now know is that there are different strains of the virus circulating around the world, and Lagos State has a very strong third wave prevention strategy.

“The likely cause of a third wave is going to be an importation from visitors who are infected with the virus, so we are particularly careful about working with the Synagogue to make sure that we have a collaboration that will reduce the opportunity to zero of us either importing a virus or even allowing someone who is positive to interact with the community.

“So we have had series of engagements with the officials and executive of SCOAN, we are also in touch with the Federal Government; the Presidential Steering Committee and the Federal Ministry of Health.

“And the Incident Commander, Mr. Governor has said that this a priority event and we have to ensure that we give SCOAN all the support it requires to make sure that the series of planned events for the funeral scheduled between the 5th of July to the 11th of July are performed under the strictness guidelines to limit any possibilities of introduction of foreign COVID variants amongst the congregation or the movement of the virus in such an environment that would make transmission easier.

“Any visitor coming into the country has to go through the mandatory seven days of isolation plus testing before they can participate in any of the activities. We’ve inspected all the accommodation, we’ve looked at the auditorium and we’ve calculated how to completely eliminate the chance and the risk of infectious transmission”, the Commissioner stated.

He stated that there were some areas of infection prevention protocols that needed strengthening in the church, assuring that those areas would be strengthened before and during the funeral activities.

He added that biosecurity and safety experts would also be on ground to work with the local organizing committee to monitor and ensure safety of attendees.

He said: “In collaboration with the Lagos State Safety Commission and the Biosecurity Unit of the Ministry of Health, we’ve seen some areas that needs strengthening, we’ve been observing these for some days now and we are strengthening the protocols, so that as events are leading up to the seven days and during the seven days, we will have marshals on ground, we will have biosecurity experts on ground, will continuously monitor the situation and work with SCOAN to make sure we can keep this place safe and keep the congregation safe and keep Lagosian safe”

The team from the State Government which also included the Incident Manager of the Emergency Operation Centre of Lagos COVID Response, Dr. Ismail Abdul Salam, members of the Lagos State Ministry of Health Biosecurity team, officials of the Lagos State Safety Commission and representatives of the Federal Ministry of Health’s Port Health Services inspected the auditorium, marquee tent, hostel accommodation for international guests and sanitary facilities during the inspection.