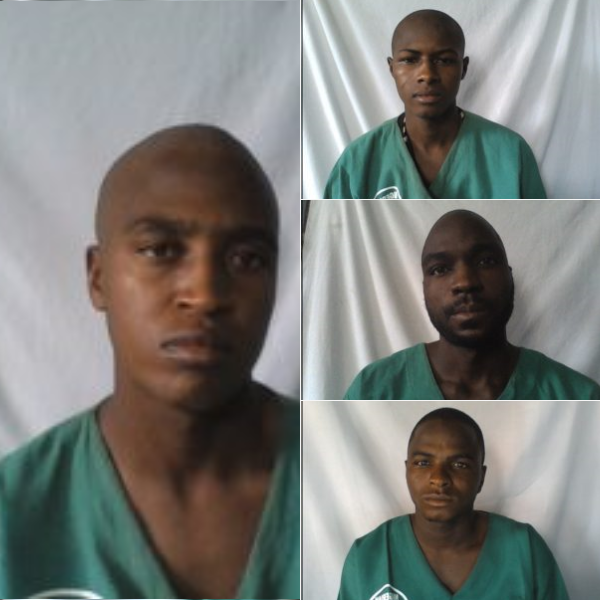 Above are the faces of the four escaped inmates

The Plateau Command of the Nigerian Correctional Service (NCoS) has confirmed the escape of four inmates from the Jos Custodial Centre.

Mr Samuel Aguda, the Controller- in-Charge of the command, confirmed the development to newsmen on Friday in Jos.

Aguda, who said the incident occurred in the wee hours of Thursday, attributed the development to negligence on the part of personnel on duty.

“You are all aware of the ugly incident that happened in our major facility here in Jos.

“Yesterday, at about 1 a.m., four suspects, who are awaiting trial over the kidnapping and armed robbery, escaped from our facility.

“When I came to the scene, I realised that it is either that they duplicated the key to the cell or there was serious negligence on the part of personnel on duty. They escaped through the fence,” he said.

“Currently, the Assistant Controller General in charge of Operations is personally on the ground investigating the matter.

“We have also constituted Search Party who visited motor parks, markets and other places in search of the escapees, but none has been arrested yet.

“But I want to assure members of the public that we will soon get them,” he assured.

Aguda called on Plateau residents to avail themselves of the Service information that would lead to the arrest of the escaped prisoners. Meanwhile, he assured that any officer and personnel of the Service that is found wanting in the incident would be punished.

He said the personnel on duty on the day the incident occurred had been detained within the prison yard pending the conclusion of the investigation.