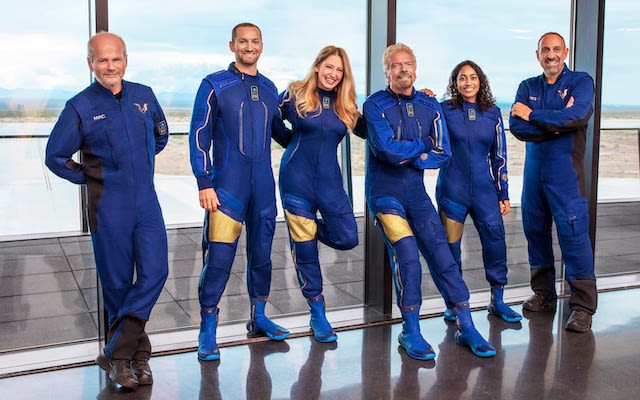 Branson, third right and the crew of VSS Unity: Mission to space accomplished

It was childhood dream fulfilled for British billionaire Richard Branson as his spacecraft flew to the lower edge of space and back to planet Earth on Sunday.

It was the first fully crewed flight from his private space tourism firm Virgin Galactic. And for him, a mission accomplished.

“I think like most kids I have dreamt of this moment since I was a kid and honestly nothing can prepare you for the view of Earth from space.”

He said he was honoured to “test the customer experience” and declared, “Welcome to the dawn of a new space age.”

“It’s just magical. I’m just taking it all in. It’s just unreal,” said Branson, who popped a bottle of champagne after he and his crew were presented their Virgin Galactic astronaut wings.

The Unity 22 mission lifted off from the New Mexico desert about 10:38 a.m. ET attached to its “mothership” aircraft VMS Eve.

Just after 11 a.m. it reached an altitude of 46,000 feet, which is higher than commercial airlines fly.

Branson, 70, served as a mission specialist on the flight, the fourth crewed spaceflight for Virgin Galactic’s VSS Unity spacecraft.

Unity was launched from the Eve mothership at an altitude of 50,000 feet and live stream video showed it shooting into space.

Within 30 seconds the spacecraft reached Mach 2 speed and a few seconds later hit Mach 3 at an altitude of weightlessness.

Onboard video showed Branson and the three other astronauts smiling as they looked out the windows of the spacecraft. They briefly unbuckled their seatbelts to float around the cabin and take in view of the curvature of Earth.

At around 11:40 a.m. ET the spacecraft touched back down on Earth, making a smooth landing back in New Mexico to loud applause and cheers at mission control.

*With reports by ABC