Messi: I offered to reduce my salary to stay at Barcelona 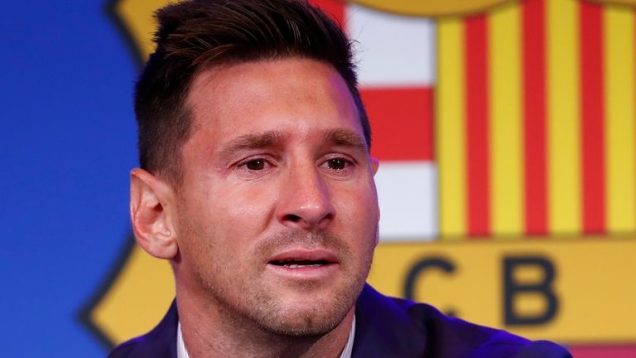 Messi shed tears while saying his good bye to Barcelona

Lionel Messi has revealed he offered to take a 50% pay cut to remain at Barcelona but an agreement could not be reached.

The Argentine said this at his final press conference in the club on Sunday.

While reiterating his desire to remain at the club, the striker revealed he offered to take a 50% pay cut and was convicted to stay but the deal broke down.

“I offered to reduce my salary by 50 percent and they didn’t ask me for anything else.

“The news that I’d asked for 30 percent more is a lie. We did everything we could and it wasn’t possible.

“A lot of things people are saying aren’t true and as I said, I did everything [I could].”

The attacker also said he did not give false hope to fans he was going to stay.

“I did everything possible and the club, Laporta, they couldn’t do it because of La Liga.

“I’ve heard things said about me, that I didn’t want to continue, but on my life, we did everything we could because I wanted to stay.

“Last year, I didn’t want to stay and I said it; this year, I wanted to stay and we couldn’t.”

He appreciated the Spanish giant for his time at the club and how he has learned and grow at the club.

“I’m very grateful for the career that I’ve had but especially in Barcelona, the titles that we’ve won, the defeats as well because they made me learn and grow.”