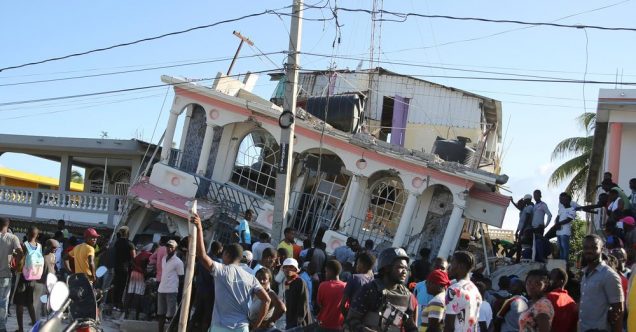 A view of Haiti earthquake aftermath

The death toll in the Saturday Haiti earthquake has risen to 1,297, the country’s civil protection authority said Sunday night.

Authorities had previously recorded 724 deaths and 2,800 injured, but the death toll was expected to climb as rescue workers continue to search for survivors.

The full extent of the destruction and damage to homes and infrastructure is not yet clear.

Rescue workers and regular citizens in Haiti are racing against an impending Tropical Storm Grace to pull survivors from the rubble of buildings destroyed by the earthquake.

Interim Prime Minister Ariel Henry has declared a one-month state of emergency in response to the quake.

Search and rescue efforts by the International Red Cross have focused on the area around the particularly affected towns of Jeremie and Les Cayes, and relief supplies for at least 4,500 people were ready.

The U.S. National Hurricane Center said the tropical storm could hit the region on Monday, with fierce winds and heavy rain worsening the situation in the earthquake-hit area and hampering rescue efforts.

Offers of aid and condolences came pouring in from abroad.

French President Emmanuel Macron said that his country, the former colonial ruler of the Caribbean nation, “remains at the side of Haiti and its people, and stands ready to support” on Twitter on Sunday.

Haiti, considered the poorest country in the Western Hemisphere, is still living with the impact of the January 12, 2010 magnitude-7.0 earthquake that killed some 220,000 people and left one million people homeless.

Damage from that earthquake, which struck near densely populated Port-au-Prince, was estimated at 8 billion dollars.