Another photo of Tinubu in London with Banire surfaces 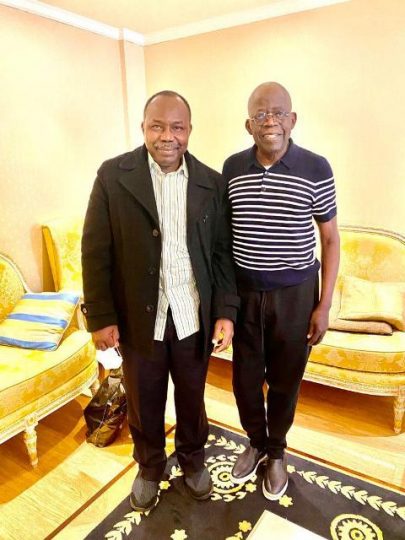 Banire with Tinubu in London

As the uproar generated by photos of President Muhammadu Buhari’s visit to the National leader of the All Progressives Congress (APC), Asiwaju Bola Tinubu is yet to die down, another picture of the former governor of Lagos State with APC chieftain, Muiz Banire in London has surfaced.

Tinubu was captured in a photo with the former National Legal Adviser of the APC, Dr. Muiz Banire in London.

Banire, who many thought has fallen apart with Tinubu, was seen posing in the photo with his former boss.

He had served as Commissioner for Transportation and Environment in Lagos for 12 years before he was appointed as the party’s national legal adviser.

At one point, Banire fell apart with Tinubu and even castigated him at several fora, but now, it appears the duo have settled their rift and are back together again.