What happened when Buhari stormed Bichi for son's wedding (Video) 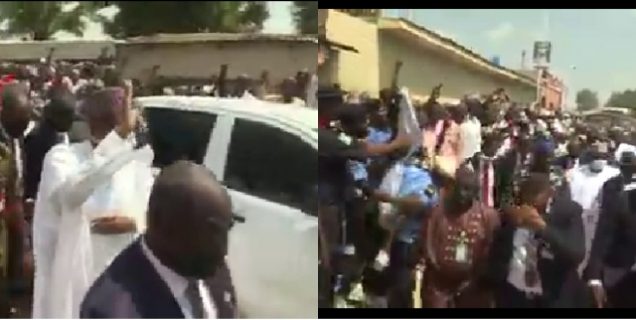 A massive crowd welcomed President Muhammadu Buhari to Bichi, Kano State on Friday during the wedding ceremony of his son, Yusuf to Zahra Nasir Bayero, the daughter of Emir of Bichi.

As the president stepped down in Bichi, thousands of locals followed him, chanting his name as he waved at them.

Buhari was simply the toast of the area as the town stood still.

The wedding held in Bichi, Kano State had Buhari, his Vice, Yemi Osinbajo, Aisha in attendant. There was also former Nigerien President Mouhamadu Yesuofu at the event.

Yusuf who is the Talban Daura, married Zahra Nasiru Bayero, daughter of the 2nd Emir of Bichi.