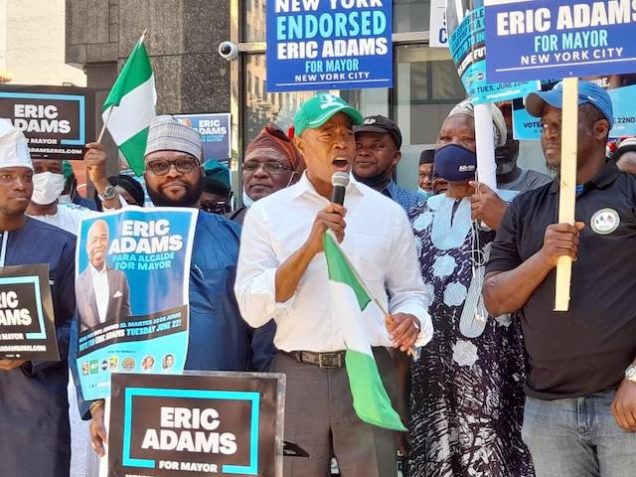 Eric Adams, the Democratic candidate for the Mayor of New York City, has assured the Nigerian community of including them in governance, if elected mayor in the November election.

Adams gave the assurance at a virtual meeting with the Nigerian community, coordinated by the Organisation for the Advancement of Nigerians (OAN) and the Nigerian-Americans Public Affairs Committee (NAPAC).

The mayoral canddidate is projected to win the November election as New York City is traditionally a Democrat city and the party usually produces the mayor.

Adams said that a transition team was being put in place ahead of the Nov. 2 election and that the Nigerian community should prepare its members to be in the team.

“We want members from your community on that transition team to give us résumés and other communications of those prominent personalities – people that can be helpful in governing.

“We don’t only want you to help us when we need you to govern, we want members of your community on the Transition Team as we figure out policies and people to move our city forward.

“So, we are excited; this is a great opportunity for us to do some great thing but we must get to the last leg of this journey and that is on November 2nd, as we win the general election.

“I can’t thank you enough for your commitment and dedication. For you were clear that I was your candidate and you committed to this victory we are celebrating right now. Thank you very much,’’ he said.

The Nigerian community had on June 5, endorsed Adams as the New York City Mayoral candidate for the general election after series of debates with the candidates and consultations among Nigerians.

Adams said that the victory would be easier if the African diaspora were involved in the endorsement, saying “we can easily walk away with the victory and that is what we saw.

“I believe for many years, we have not engaged our brothers and sisters from the continent of Africa and I wanted to change that.

“This is the beginning of a new relationship with our fellow family members on the continent of Africa. There is so much we can do together.

“They started with me when we went to Goree Island, Senegal, and established a city agreement with Brooklyn and we continued to build on a rich relationship with the continent’’.

Adams, who is Brooklyn Borough President, further solicited the support of Nigerian community in the general election, noting that there ate still candidates contesting with him.

“I believe we are going to be strong enough to beat them. There are several things that needed to be done to accomplish this task.

“I need you to get the job done, the mobilisation effort that you will put in place, the thousands of phone calls, reaching out to the various groups, raising the money and other campaign activities.

“We were successful in raising the money during the primaries, raising 11 million dollars by having small group hold events and we want to do it again.

“We need to raise 7.2 million dollars that we need; we want to encourage you to reach out to your constituency and tell them that we can raise that amount of money,’’ he said.

“For us here at Nigerian community, it has been a pleasure forming and building a coalition toward engaging our people in the civic process and mobilising our votes into bloc towards your mayoral candidacy.

“We are proud to say we delivered on our promise. Among many things, we did an endorsement, we organised a fund raiser and we launched an SMS banking campaign targeting 10,000 African voters.

“We also coordinated campaigns in churches, mosques and ethnic associations.

“We believe this is just the beginning; our goal is to work to make sure that your nomination translates into a landslide victory in November,’’ he said.

The official however advised Adams to implement people’s plan that would deliver on security, assistance in housing and support for working families across the five Bureaux of New York.

“Our coalition will like to continue the mobilisation by inviting you to attend the major Nigerian churches and mosques to engage our religious leaders,’’ he said.