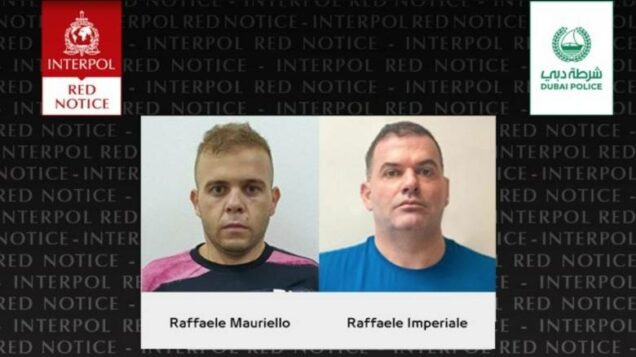 Red notice for Mauriello and Imperiale

The Dubai Police have announced the arrest of Raffaele Imperiale, one of Italy’s most wanted criminals.

He was arrested along with his right-hand man, Raffaele Mauriello.

Imperiale is the alleged kingpin of organised crime syndicate ‘Camorra’ that is involved in drugs and weapons trafficking crimes across international borders.

His accomplice, Mauriello, is responsible for plotting and executing murders and assassinations using unlicensed firearms, the police said on Wednesday.

Both Imperiale and Mauriello are wanted by Italian authorities and Interpol, which has issued ‘Red Notices’ against them.

According to Khaleej Times, Imperiale was living in Dubai using a fake identity and used the name ‘Antonio Rocco’.

To throw security agencies off his track, he would travel in different cars and resided in an isolated apartment.

The house’s location helped him observe the people that approached it. He had intentionally avoided registering an address, to mislead authorities and remain in the shadows.

Raffaele Imperiale was born and raised in the Italian city of Naples.

He’s been a member of the ‘Camorra’ syndicate since his early childhood. He is considered one of Italy’s most dangerous and wanted fugitives by the Anti-Narcotics Directorate in Stabia, Naples.

The force used its Oyoon project, which is powered by a network of smart cameras, to track the accused for a week.

“At the zero hour, a team raided the house and arrested Imperiale. The team also seized large sums of cash, luxury watches and some valuable possessions, including paintings.”

The officer said the accused are now under the custody of the Dubai Public Prosecution, which will determine the mechanism for their extradition.

In recent months, the Dubai Police have made multiple high-profile arrests of criminals wanted outside the UAE.

In May, the police arrested Michael Paul Moogan, who had been on the run from the UK authorities for over eight years. One of the most wanted fugitives in the UK, the accused had entered the UAE by using a fake identity.

A month prior, the force arrested French drug lord Moufide ‘Mouf’ Bouchibi, who had been on the run for 10 years.

In March, the police foiled an “international criminal plot” to steal and smuggle high-end cars outside the country using fake licence plates.

In July last year, the US’ Federal Bureau of Investigation (FBI) had thanked the Dubai Police for their “exceptional efforts and cooperation” to arrest Raymond Abbas, known as ‘Hushpuppi’, and Olalekan Jacob Ponle ‘Woodberry’ in operation ‘Fox Hunt 2’.

The police took down the suspects for committing crimes outside the UAE, including money-laundering, cyber fraud, hacking, criminal impersonating, scamming individuals, banking fraud and identity theft.

Six SWAT teams from the Dubai Police swooped down on the accused and helped prevent a Dh1.6 billion fraud.