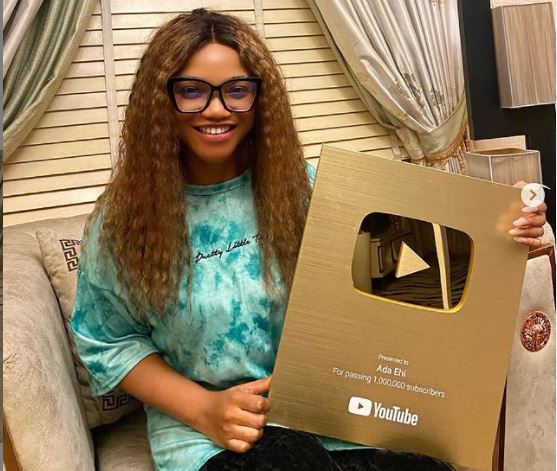 The award-winning songwriter and mother of two took to her Instagram page to announce the milestone to her fans and followers.

She shared a picture and video of the plaque while giving thanks to God for the feat.

She wrote: “I remember a simple prayer I prayed some years ago when I realized that the Lord had started speaking to me and showing me visions and flashes of things to come, I knew quite well that i wasn’t the most talented, gifted or the most anything at all but I was willing if he could use what I had… no one else saw much in it anyways so He alone could use it.

“SEE WHAT THE LORD HAS DONE! 🙇🏽‍♀️DEAREST JESUS!

“I would always say, It is amazing how far the Lord can take anyone who is willing… let me add AND YIELDED! THANK YOU LORD, FOR THE ADDED RESPONSIBILITIES WITH THE GRACE 🙌🏽 I AM GRATEFUL JESUS”

Ehi started her musical career at the age of 10 as a backup singer for child star, Tosin Jegede.

She professionally started her music career under Loveworld Records in 2009 and has since increasingly gained local and international popularity through her songs and music videos.