Update: Many casualties in twin-bomb attack at Kabul Airport 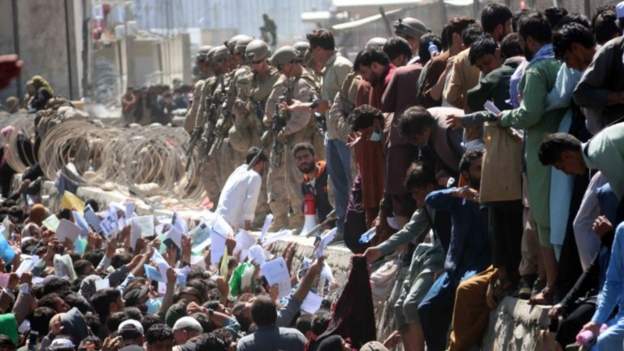 Thousands of Afghans at the gate of Kabul Airport. Photo:EPA

Many casualties have been reported in a twin bomb attacks at Kabul airport, Afghanistan, with unconfirmed reports saying 10 people have been killed.

At least two explosions have been reported near the Abbey Gate, being used for evacuations at Kabul airport.

One blast was near the Baron Hotel, being used as a staging post by Western nations for evacuations, according to the BBC.

A Pentagon spokesman confirmed there had been a “number of US and civilian casualties” in the attack. There are pictures of bodies at the scene.

US officials also say there were reports of gunfire. The bombings come hours after US and UK officials told their citizens to avoid the airport, citing an imminent threat from militants

US President Joe Biden has been briefed and is monitoring the situation, with UK PM Boris Johnson set to chair an emergency response meeting later.

Huge crowds of people have built up at Afghanistan’s border with Pakistan as people try to flee Taliban rule.

Westerners and Afghans who worked for foreign missions want to leave after Taliban militants came back to power.