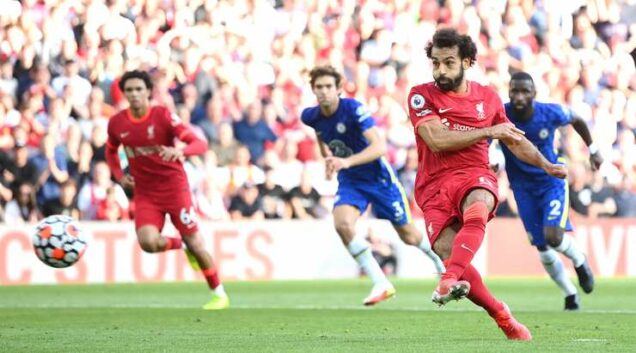 Ten-man Chelsea on Saturday battled to hold Liverpool to a 1-1 draw at Anfield in their third premier league game.

Chelsea had taken the lead on 22 minutes from Kai Havertz from a corner kick.

Havertz got on the end of the corner kick and produced a fantastic bullet header from around the penalty spot which went inside the right post.

The home side suddenly woke up and took the battle to Chelsea.

Liverpool got a deserved equaliser from the penalty spot on three minutes added time in the first half.

Reece James had handed the ball in the 18-yard box and was issued a straight red card as the referee pointed to the penalty spot.

Mohamed Salah won the battle of wills and sent an unstoppable penalty past Edouard Mendy into the bottom left corner to make it 1-1.

Liverpool mounted the pressure in the second half but Chelsea have Mendy to thank as he stood solidly in post to deny Liverpool several chances.

The home side were the better side, garnering 65 percent ball possessions, 23 goal attempts and eight shots on goal.

Chelsea, with 35 percent ball possessions, six goal attempts and three shots on goal defended for most part of the second half and were luck not to have conceded goals.