Arteta in trouble as Arsenal collapse heavily at Etihad 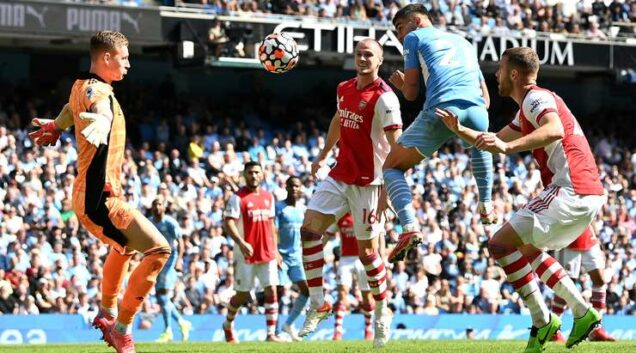 Torres grabs his brace for City against Arsenal

City were 3-0 up in the first half and completed the rout in the second half in a dominant performance at home.

Ilkay Gundogan, Ferran Torres, and Gabriel Jesus put Manchester City in charge in the first half.

It took only 7 minutes for Pep Guardiola’s men to crush Arteta’s side.

Gundogan peels off between two tall center-backs, who don’t judge the cross well, and heads in brilliantly.

He started the move by finding Bernardo, who fed Gabriel Jesus and the pair kept possession in the corner. And the cross was superb for Gundogan to head in.

The cross eventually comes in and Ferran Torres instinctively strokes home after some awful defending from Calum Chambers and Rob Holding.

The Arsenal midfielder catches Cancelo high and dangerously with a reckless challenge. Cancelo did well to move his leg out of the way of Xhaka’s two-footed lunge to avoid any serious injury.

Gabriel Jesus then added another blow to the problems.

It was created by Grealish then finished by Jesus.

Grealish advanced into the box, twisting Chambers right then left, and his outside-of-the-boot pass allowed a prodded finish for Jesus.

In the second half, Rodri scored City’s fourth goal while Torres got his brace in scoring the fifth goal.

Torres had a hand in the fourth gosl, ashe spotted his teammate in a good position on the edge of the box and provided him with a nice pass.

Rodri did not think twice and rifled a first-time shot into the bottom right corner.

For the fifth goal, Riyad Mahrez produced a beautiful lofted cross into the box where Torres rose high to head the ball off the woodwork into the bottom left corner.