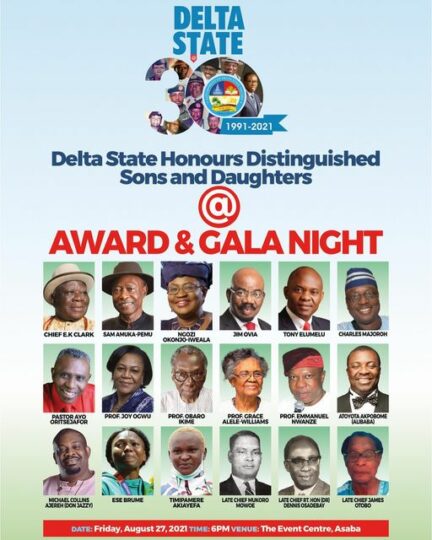 No fewer than 81 personalities of Delta origin, including the Director-General, World Trade Organisation, Dr Ngozi Okonjo-Iweala, were honoured by the state government as it marked 30.

The icons were honoured at a Gala and Award Night on Friday in Asaba to mark the grand finale of a week-long celebration of the 30th anniversary of the creation of the state.

The awardees included Chairman of Zenith Bank, Mr Jim Ovia; Chairman of United Bank for Africa, Mr Tony Elumelu; and eminent scholar, Prof. Obaro Ikime, for their contributions to the development of the state and country.

Speaking at the event, Gov. Ifeanyi Okowa said the state had in its three decades of existence been a centre of diversity and inclusion, trials and triumphs and growth and stability.

He thanked the people for their support and cooperation in building a smart, strong and safe state.

“After 30 years, I can boldly say that it has been three decades of diversity and inclusion, of trials and triumphs, and of growth and stability.

“More significantly, the people of the state have come to live as one big, happy family and the state has continued to forge ahead in all indices of human, physical and economic development,” he said.

He expressed gratitude to the civil servants – serving, retired or late – who made huge sacrifices to ensure the successful take-off of the State.

Okowa said that his administration was breaking new grounds in job and wealth creation through entrepreneurship development while building roads and physical infrastructure of the most vital interest and impact.

“A classic example is the 20.28km Obotobo I – Obotobo II – Sokebolou – Yokri Road, beside the Atlantic Ocean in Burutu Local Government Area.

“Furthermore, the riverside communities of Burutu, Oporoza, Okerenkoko and Benekrukru, among others, have been given a facelift with well-paved roads, while most urban centres are being enhanced through growth and renewal.

“As we reflected on the last 30 years, it is clear to us that celebration of this milestone will not be complete without recognising Deltans who have made the state proud in their various fields of endeavour.

“While the public/civil servants are holding the home front, many of our own are flying the flag of the state in the national arena.

“Hence, we decided to recognise some of our distinguished sons and daughters, and to also use the opportunity to let the whole world know the invaluable contributions Deltans are making to project Nigeria,” he said.

“As a government, we thought this is a good starting point and we are deeply grateful that the awardees considered it worthwhile to be here today and we thank you for giving us that honour,” the governor stated.

He solicited the continued support of all the people, including those in the Diaspora, to his administration in its determination to deliver a stronger Delta to them.

Okowa assured that ongoing projects and programmes would be concluded while premiums would continue to be attached to the well-being of citizens.