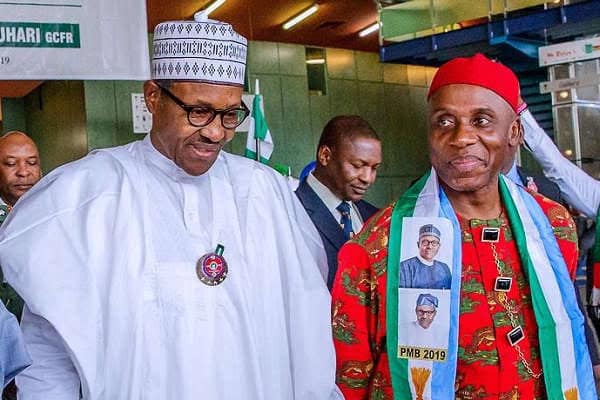 The Peoples Democratic Party (PDP) said the confession by the Minister of Transportation, Rotimi Amaechi, vindicates its stand that the APC is a haven of thieves and treasury looters.

PDP stated this while reacting to the statement made by Amaechi that anyone stealing public funds under the administration of President Muhammadu Buhari is doing so “quietly”.

Amaechi told Dail Trust that: “I want Nigerians to be honest; can you openly take money from this government? I am not saying whether we are corrupt or not,” he said.

“Let us assume we are corrupt, can you openly take money from this government? In the past governments, what happened? You can take money in the streets.”

However, PDP said the confession confirmed that the Buhari-led APC administration has been providing official cover for corrupt officials, who have turned government agencies to cash cows and Automated Teller Machines (ATM) for themselves, their cronies, family members and mistresses.

The statement by PDP further said;

“The situation as presented by Amaechi shows that ‘quiet stealing’ is a policy of the APC administration.

“This explains why the administration is heavy on propaganda and has failed to prosecute its officials and APC leaders openly indicted for corruption, but only resort to “easing out” such thieves with a pat on the wrist.

“The confession by Amaechi exposes why the APC administration has failed to recover the over N25 trillion naira reportedly stolen by APC leaders in various government agencies.

“Nigerians now have a clearer picture on how the N9.3 trillion as detailed in the reported NNPC memo was stolen, how over N2 trillion was allegedly siphoned under fraudulent subsidy regime as well as how the N1.1 worth of crude oil was reportedly stolen using 18 unregistered vessels.

“This is in addition to the revelation by the National Security Adviser (NSA), Gen. Babagana Monguno, that billions of naira meant for security under the APC could not be traced.

“Nigerians now know how billions of naira were reportedly stolen from various agencies including the National Health Insurance Scheme (NHIS), the National Emergency Management Agency (NEMA), in which a very top APC government official was indicted, as well as the N500 billon Social Investment Programme fund, as revealed by First Lady, Aisha Buhari, were siphoned.

“Amaechi’s confession has also shed more light on the circumstance behind the alleged stealing of N165 billion in the Nigeria Ports Authority (NPA) under his ministerial purview, the N1.5 trillion and $9.5 million reportedly stolen from Nigerian Maritime Administration and Safety Agency (NIMASA), the $65 million (N31 billion) frittered from the Federal Mortgage Bank of Nigeria (FMBN) as well as the N90 billion looted from the Federal Inland Revenue Service (FIRS), among others.

“This is in addition to the alleged secret looting of a huge part of foreign loans and repatriated funds placed at the disposal of the APC and its administration.

“The APC has looted our nation into two excruciating economic recessions in a space of six years, and turned our nation into the poverty capital of the world, where over 83 million citizens live in abject impoverishment and unable to afford basic necessities of life.

“The PDP charges Nigerians to hold the APC and its leaders responsible for all the woes that have befallen the nation in the last six years and ensure that the fizzling APC is not allowed anywhere near the governance of our nation, come 2023.”