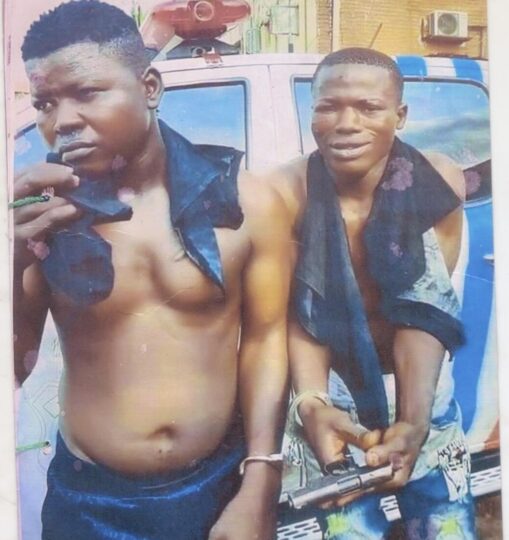 Operatives of the Special Weapons and Tactical (SWAT ) at Adeniji Adele, Lagos Island, have dragged two robbery suspects before the Tinubu Magistrate’s Court for allegedly firing gunshots at an American, Jordan MC Crackin inside his car in a bid to kill him and rob him of his $2,000 and other items.

The suspects, Olamilekan Abdulateef, 23, who claimed to reside at Ajegunle, Apapa, and Tajudeen Sanusi, a resident of Amukoko area of Lagos were charged before the Court on a three-count bordering on conspiracy, armed robbery and unlawful possession of firearms.

The plea of the suspects was, however, not taken following the application for the remand of their presented before the Court by the Police Counsel, Abraham Fadipe, urging the Court to remand the suspects at the correctional facility to enable the police duplicate the case file and send it to the Department of Public Prosecution, DPP for legal advice on the matter.

Following the application, the presiding Chief Magistrate, A.T Omoyele ordered that the suspects be kept at the Ikoyi Correctional facility pending the legal advice from the DPP on the matter and adjourned the case till 9 November, 2021 for mention.

According to the police, trouble started for the suspects on 25 May, 2021 when they trailed the American in their motorcycle from a bank on Adeola Odeku Street, Victoria Island, Lagos where he had gone to withdraw money, to Renees Supermarket in Ikoyi and opened fire on his car, but the bullets missed its target and hit the back door.

The suspects, according to the police robbed the American of $2000 and other items armed with a bareta pistol.

A Police source alleged that while the robbery was going on, concerned members of the public alerted the Rapid Response Squad patrol team nearby who stormed the scene to arrest the suspects.

After preliminary investigation at the Lagos State Police Command, the suspects were transferred to the Police SWAT office at Adeniji Adele, Lagos headed by DCP Durosimi Olatoye for proper investigation.

Following the transfer of the case, DCP Olatoye directed his crack team led by the Commander in charge of SWAT operation at the Command, SP Ibrahim Yusuf to properly investigate the suspects.

Items recovered from the suspects, according to the Police include an English bareta pistol and other dangerous weapons..

During investigation, the suspects allegedly confessed to the crime that they had been robbing the public for the past five years but that they had not kill anybody in their operation.

In his alleged confession to the Police, Abdulateef stated, “We started robbery as pick pocket at Ajegunle roundabout, Apapa and later bought a motorcycle and started using it to snatch handset and handbag from the public during morning and evening rush hours while armed with cutlass and knife.

“We later bought an English bareta pistol for N100,000 from one Qudus at Aduke Street junction, Ajegunle and using it to rob people who withdrew money from the bank at Ajegunle and Victoria Island, Lagos.

“We normally park our motorcycle within the bank premises and entered inside the banking hall like customers to identify those withdrawing money and once we identify them, we would monitor them in our motorcycle to a lonely spot to rob them of the money and escaped.”