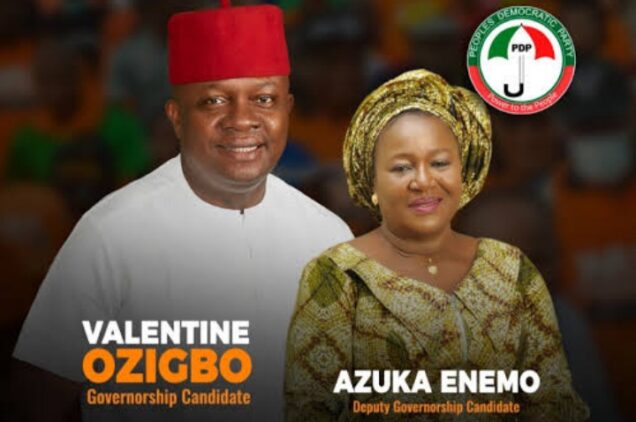 The Independent National Electoral Commission (INEC) has recognized Mr Valentine Ozigbo as the candidate of the Peoples Democratic Party (PDP) for the Nov. 6 Anambra governorship election.

The commission had on July 16 and August 19 published the list of candidates for the Anambra election with no candidate listed for PDP.

However, Mr Festus Okoye, National Commissioner, and Chairman of Information and Voter Education Committee said INEC met on Thursday and considered a number of issues relating to the governorship election, including the latest court order.

He said: “The Court of Appeal has ordered the commission to recognize and publish the name of Ozigbo as the governorship candidate.”

He noted that earlier, PDP had substituted its deputy governorship candidate within the deadline provided by law.

He said the final list of candidates would be published on Oct. 7 as provided in the timetable and schedule of activities for the election.

On movement of non-sensitive materials for the election, Okoye said INEC would be in position to deploy its materials from its Awka office instead of the earlier stated Zonal office in Owerri.

He recalled that INEC State Office in Awka was attacked by unknown gunmen.

“The damage to the physical facility was extensive. So too was the destruction of movable materials, including 50 per cent of the non-sensitive materials already delivered for the election.

“While the commission is making efforts to rebuild the physical facilities, we took a pragmatic decision to distribute the replacement of non-sensitive materials from our South East Zonal Stores in Owerri in order to meet our deadlines.

“For clarity, the non-sensitive materials are the non-pharmaceutical COVID-19 items such as hand sanitisers and face masks, envelopes, posters, stickers, sellotape, scissors, liquid gum and other stationery required mainly at the polling unit level,“ he pointed out.

Okoye, however, said following a review of the deadline for the completion of work on the destroyed physical facilities, INEC was satisfied that the ongoing work would be completed by the end of September.

“Consequently, the commission is now in a position to operate from our office in Awka where the batching and distribution of all non-sensitive materials will take place.

“We appeal to all stakeholders to continue to cooperate with the commission for a transparent and credible election in Anambra State,” he said.