Ronaldo returns with a bang, grabs brace for Man. United 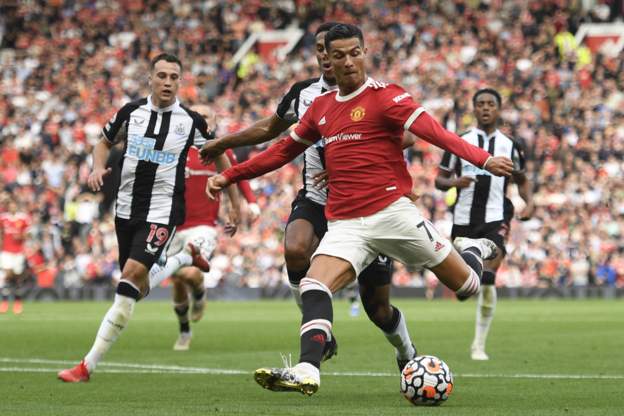 Cristiano Ronaldo returns to the English Premier League with a bang as he grabbed a brace for Manchester United against Newcastle United on Saturday.

The game ended 4-1 in favour of United as they outclassed Newcastle.

Ronaldo started the match on his second stint at Old Trafford. The crowd was huge, many were expecting him to perform the magic that had made him a superstar over the years and he did not disappoint.

With the game heading for a 0-0 for the first half, Ronaldo scored on two minutes added time to give United the lead.

He fired a rebound inside the left post after the ball broke to him in the box.

Newcastle equalised few minutes into the second half as Allan Saint-Maximin teed up Javier Manquillo inside the box to rolled the ball into the bottom left corner and past David de Gea.

Luke Shaw produced a great pass that found Ronaldo inside the penalty area, who took advantage of the situation to rifle a low shot into the back of the net.

Bruno Fernandes scored the third goal for United on 80 minutes from just outside the box.

He wasted little time in getting away a bullet of a shot that flew past the goalkeeper into the top left corner of the net.

Jesse Lingard completed the demolition of Newcastle on added time.

Paul Pogba found Lingard with a lovely pass inside the penalty box, who then smashed the ball inside the right post.