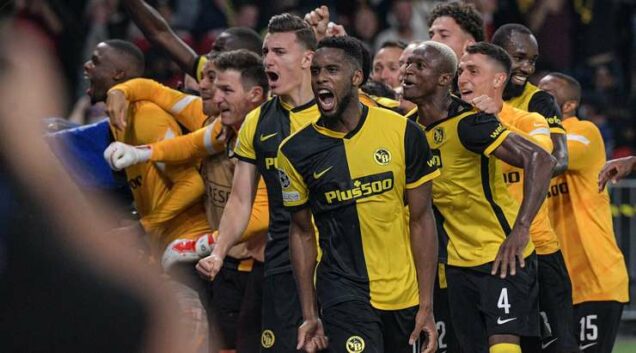 Manchester United began their Champions League campaign on a terrible note as they were stunned by Young Boys of Switzerland.

Young Boys came from behind to beat United 2-1, thanks to a red card received by Aaron Wan-Bissaka on 35 minutes of the match.

The Swiss team capitalised on this to claim victory.

Cristiano Ronaldo had given United the lead on 13 minutes after he received a well-taken defence-splitting pass inside the box and fired the ball past the goalkeeper.

Young Boys fought back after Wan-Bissaka’s red card to make it 1-1 on 66 minutes.

Nicolas Moumi Ngamaleu showed good composure inside the box to fire a first-time shot inside the right post.

There was drama on five of the six minutes added time as a terrible mistake led to the homers’ second goal to claim a historic victory against United.

Jesse Lingard, who came in for Ronaldo on 72 minutes played an absolutely horrendous back-pass that Jordan Siebatcheu cuts out and slotted beyond the onrushing David de Gea.