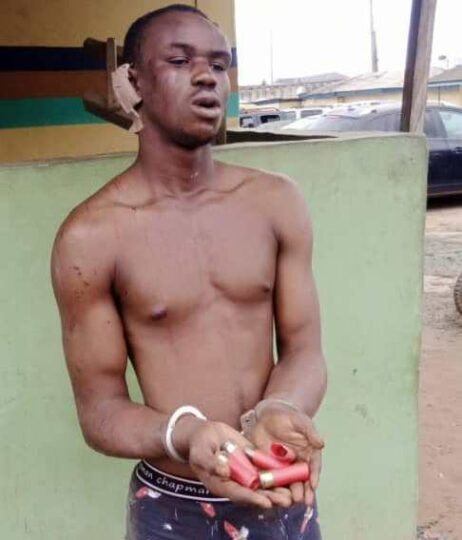 The command’s spokesman, DSP Abimbola Oyeyemi in a statement on Saturday said the suspect was arrested following a distress call received by the Divisional Police Officer, DPO, Sango divisional headquarters at about 9:45 p.m. on the 14th of September, 2021 that a two-man armed robbery syndicate were attacking one Rasaq Hamed at Ile Pupa Iloye area of Sango Ota in order to dispossess him of his car.
“Upon the information, the DPO, Sango Ota, CSP Godwin Idehai quickly mobilized his patrol team and moved to the scene.
“On getting to the scene, the robbers who were shooting sporadically took to their heels, but they were hotly chased and one of them was arrested with the help of members of the community, while the other one escaped,” he said.
Recovered from the suspects were four live cartridges and one expended cartridge.
“Meanwhile, the Commissioner of Police, Edward Awolowo Ajogun has ordered a massive manhunt for the fleeing member of the gang.
“He also directed that the arrested one be transferred to State Criminal Investigation and Intelligence Department for discreet investigation,” he said.
Tags:   Nnamdi Omeka   Ogun Police Command