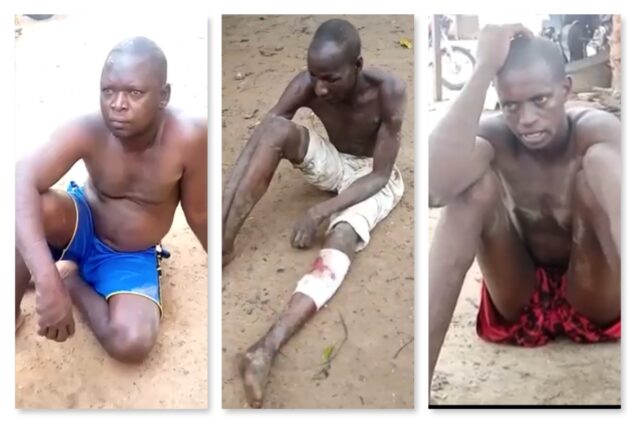 Some of the bandits arrested by Kogi Vigilantes

The Kogi vigilantes group has killed 11 bandits and also arrested their armorer, an officer of the Nigerian Security and Civil Defence Corp(NSCDC) and his accomplice.

The neutralised bandits were said to have been terrorising various communities in Koton Karfe Local Government Area of the state.

Three kidnapped victims were also rescued from the kidnappers den.

He was alleged to be giving information to the criminals to undertake their heinous crimes.

“A group of bandits terrorising some parts of Koton Karfe Local Government Area of Kogi State have met their waterloo.

“As officers of the State’s Vigilante Group killed 11 of them, arrested others while three kidnapped victims were rescued successfully

“The successful operation by the security operatives was done in series and with a detailed account the Kogi State Vigilante operatives narrating that Alaidi, the ring leader was killed during the first camp attack.

“Other Members of the bandit group, Rabo and seven others were crushed.

“Madei and one other were killed in the second kidnappers camp while Umar escaped with gunshot wounds but was recaptured.

“Five of the kidnappers arrested including the Civil Defence operative were in the custody of the Department of State Security for further investigations,” the statement read in part.

He also noted that such security success by the operatives was a welcome development and a proof that the security architecture of Kogi was strong and solid enough to quash all forms of criminal vices.

He said that the Local Vigilantes across the state have continued to record good results because of the morale boost and support the governor has continued to give.

Muhammed also listed cooperation from the citizens and synergy between the security operatives as reasons for the security successes in the state.

He stated that the continued efforts of the state government to keep the momentum as the safest state in the country were so far yielding remarkable results.

The spokesman said that that the governor has severally made a commitment to securing the lives and property of the citizens and make the state a no-go-zone for criminal elements.

He reiterated that governments at all levels would continue to make efforts towards sustaining the drive for a peaceful Kogi by making every nook and cranny of the state unsafe for criminal elements and their sponsors.