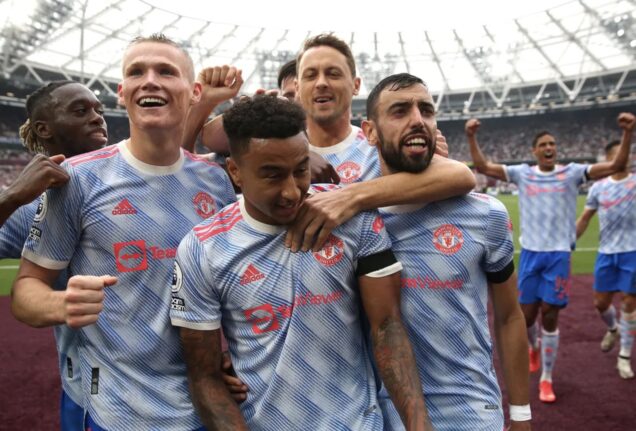 Jesse Lingard mobbed by team mates after scoring the winner

Manchester United escaped with a 2-1 victory against West Ham on Sunday, thanks to Jesse Lingard and the keeper David De Gea.

Lingard made an amend for his capital error that made Manchester United lose their first Champions League match, by scoring the winner in the 89th minute.

But the ultimate hero was United’s keeper David De Gea, who stopped Mark Noble’s penalty, to deny West Ham a share of the points.

Noble was brought in as a substitute to take the penalty.

It proved a miscalculation for the London Club.

“It’s always going to be a big call to bring a player off the bench to take a penalty kick – he’s not warmed up, he’s not in the game,” said Premier League pundit, Tim Sherwood.

“It’s not in the corner and it’s a nice height for De Gea – it’s a good save. You have to feel for Mark Noble,” he said.

West Ham had led the match at London Stadium in the 30th minute with a goal by Said Benrahma.

The match was going for a certain draw despite United dominance 61-39, when Lingard found a goal, dribbling past several defenders, to put the ball in the left corner.