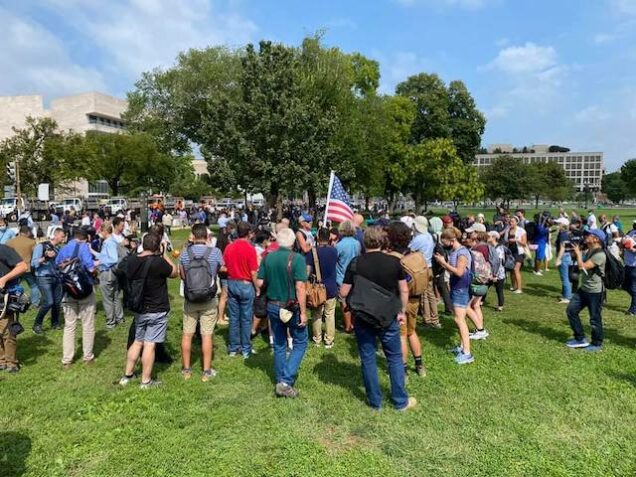 The hyped rally by supporters of former President Trump, the people who breached the U.S. Capitol on on Jan. 6, ended a flop Saturday as it was sparsely attended.

According to reports, Police and media vastly outnumbered the protesters.

Just about 100 to 200 protesters showed up, some carrying the flags of the right-wing group Three Percenters over their shoulders.

It was far fewer than the 700 people organisers had expected and the thousands who brought mayhem to the Capitol on Jan. 6.

Hundreds of officers patrolled the Capitol grounds and a black eight-foot-high (2.44 m) fence that surrounded the white-domed building for about six months after the attack was reinstalled, reflecting unease about a potential repeat of Jan. 6. One hundred National Guard troops were on standby.

As part of an effort by some of Trump’s far-right supporters to rewrite the history of the deadly mob assault on the Capitol that was captured in graphic video, speaker after speaker insisted that hundreds of rioters arrested for their actions that day were “political prisoners” who committed no violence.

Prosecutors and legal experts say the cases are being handled properly.

“This is about justice and disparate treatment,” said Matt Braynard, a rally organizer and supporter of Trump’s false claims that his defeat was the result of widespread fraud.

While crowds were small, passions rose at times, with sporadic yelling matches breaking out between participants in the rally and counter-demonstrators. Police on bicycles moved in to break up some of these squabbles.

Capitol Police reported four arrests, including a man armed with a handgun spotted in the crowd, though they said it was “not clear why the man was at the demonstration.” Officers in riot gear also removed one man from the rally who had a large knife strapped to his hip.

Organizers of the “Justice for J6” rally called for a peaceful event, but U.S. Capitol Police Chief J. Thomas Manger told reporters on Friday there had been threats of violence linked to the rally, some targeting individual members of Congress, and police were bracing to prevent clashes between Trump supporters and opponents.

Tony Smith, 40, of Upper Marlboro, Maryland, said he had come to voice his support for a fair judicial process for those charged in the breach of the Capitol.