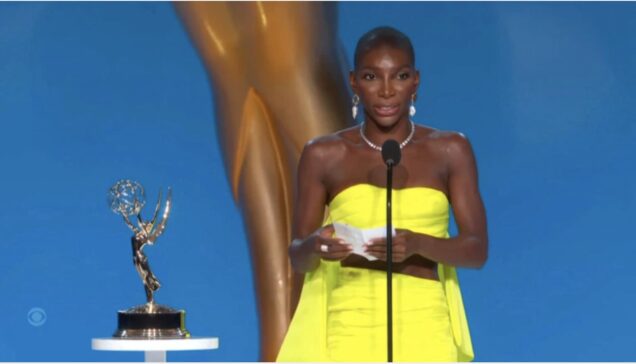 Despite a record number of nominees, no actor of colour had success in any of the major acting categories.

However, I May Destroy You’s Michaela Coel from Britain did win the award for outstanding writing for her work on the poignant drama.
.
Other winners were RuPaul, host of the competition show “RuPaul’s Drag Race;” and the cast of hip hop Broadway musical “Hamilton,” which won the Emmy for variety special after it was filmed for television.

Dancer, singer and actor Debbie Allen was given an honorary award celebrating 50 years in show business. “It’s taken a lot of courage to be the only woman in the room most of the time,” Allen said.

The award ceremony, which is usually held at The Microsoft Theatre, took place in a tent in downtown LA this year, after 2020’s ceremony was held virtually due to coronavirus restrictions.

Chess drama “The Queen’s Gambit” was named best limited series and tied with “The Crown” for the most wins overall at 11 apiece.

The show also brought statuettes for Britons Hannah Waddingham and Brett Goldstein for their supporting roles in the tale of a struggling English soccer team that won over TV fans with its folksy humor during the dark days of the coronavirus pandemic.

“This show is about family. This show’s about mentors and teachers and this show’s about teammates. And I wouldn’t be here without those three things in my life,” Sudeikis said on Sunday.

It was a good night for women, and for Britons.

“Write the tale that scares you, that makes you feel uncertain, that isn’t comfortable,” said Coel, who dedicated her Emmy to sexual assault survivors.

Lucia Aniello got a rare directing win for a woman for the comedy series “Hacks” about a fading female comedian. She also was one of the winning co-writers. Britain’s Jessica Hobbs took home a directing Emmy for “The Crown.”

“Not a lot of women have won this award so I feel like I am standing on the shoulders of some really extraordinary people,” Hobbs said.

Seven of the 12 acting awards went to Britons, including Olivia Colman and Josh O’Connor for playing Queen Elizabeth and heir to the throne Prince Charles in a fourth season of “The Crown” that focused on the unhappy marriage of Charles and Princess Diana.

“We’re all thrilled. I am very proud. I’m very grateful. We’re going to party,” said Peter Morgan, creator of “The Crown,” at a gathering in London for the cast and crew.

An exuberant Kate Winslet won for her role as a downtrodden detective in limited series “Mare of Easttown,” while Ewan McGregor was a surprise winner for playing fashion designer “Halston.”

Concerns over the Delta variant of the coronavirus forced Sunday’s ceremony to move to an outdoor tent in downtown Los Angeles, with a reduced guest list and mandatory vaccinations and testing but a red carpet that harked back to pre-pandemic times.