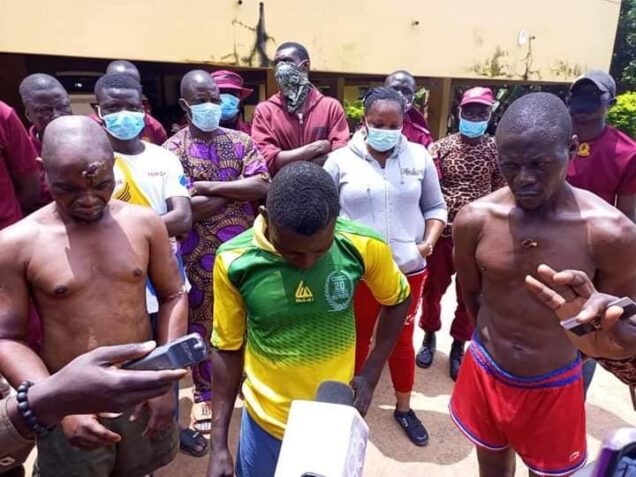 They told journalists that they nabbed the 73-year-old Adebisi on Sunday on Amuloko-Akanran Road, Ibadan.

Ismail said he was paid N35,000 to deliver a human head needed by Olanrewaju for money ritual.

He said that he and his gang could not get the head and Muhideen delivered the 73-year-old victim whom they slaughtered and beheaded.

Ismail said he was afraid of killing the victim until Muhideen used a charm to order him which he obeyed.

Muhideen who delivered the victim also said he hypnotized the 73-year-old and asked him to board a tricycle, which they used to whisk him away to where he was slaughtered.

He said the headless body was taken to a house where it was buried.

Their cover was blown when a woman discovered the shallow grave and called other landlords who reported the case to the Amotekun corps.

Muhideen said he has been in the business of selling human skulls and he gets paid around N40,000 and N60,000 for one human head.

The headless corpse has been recovered by Amotekun corps as evidence.

Olanrewaju, who also confessed that he needed the head for a ritual, said he took it to his house and burnt it in an earthen pot.

Kazeem Akinro, Amotekun Deputy Commandant in Oyo State said the suspects would be handed over to the police for further investigation and prosecution.