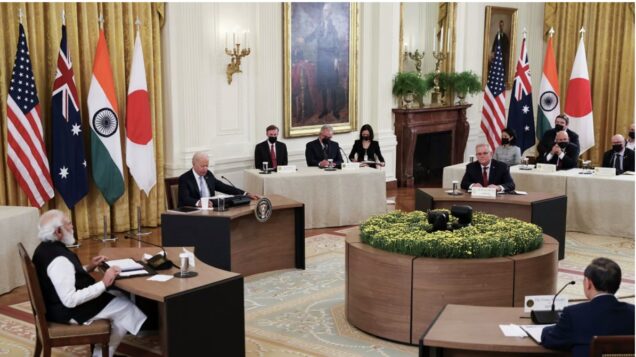 Quad leaders at a meeting with Joe Biden in Washington D.C.

China has warned Australia, India, and Japan, the Quad nations, that the US will “dump” them like “trash”, the way it abandoned its allies in Afghanistan, a reference to the widely-criticised troop withdrawal from the region.

The warning was sounded in the state-backed Global Times, as the heads of the four-nation “Quad” grouping convened in Washington, DC, for the first-ever in-person summit on 24 September.

“If Japan, India, and Australia go too far in following the US strategy of containing China, they will become cannon fodder as China will resolutely safeguard its interests”, the Global Times quoted analysts as saying.

The column quoted Fudan University Professor Lin Minwang as saying that even after suffering a “great loss” to its interests in Afghanistan in the wake of the takeover of the country by the Taliban, India had “swallowed the bitter pill” without complaining to the US.

In an editorial published on the eve of the Quad summit, the Global Times also warned the Asian democracies that they could incur significant retaliation from Beijing if they followed the US “too far” in confronting Beijing.

The Global Times cautioned that Washington would adopt an “Asian versus Asian” strategy and pit certain countries in the region against others while itself standing down from “directly engaging” in regional affairs.

The newspaper claimed that the true purpose of the Quad was to “encircle” China, even as it wondered why exactly the US would want to encircle the world’s second-biggest economy.

“Every element [of the Quad] contains a great deal of imagination. As a result, the agenda of the Quad is rather distorted and full of paranoid extensions, like argots which are ambiguous but can be understood by conjecture”, the editorial said.

The Chinese media further described the Quad as being comprised of “four wards with four different diseases”.