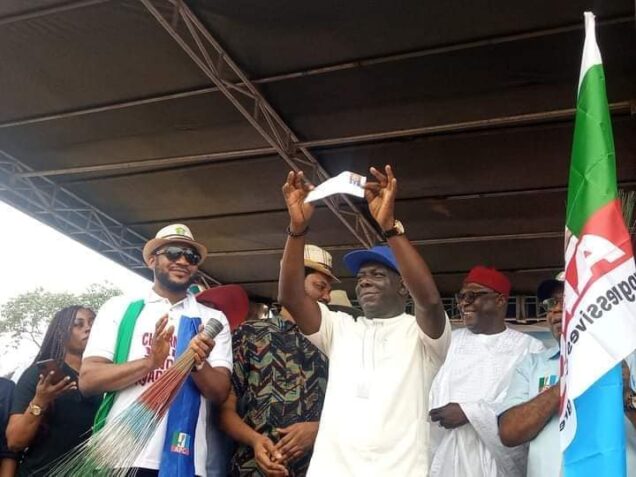 Sen. Stephen Adi Odey, who was sacked by the Appeal Tribunal recently has dumped the Peoples Democratic Party to join the ruling APC in Cross River.

The event which took place in his Yache ward on Saturday was well attended by the party bigwigs.

Sen. Mbu described Sen. Odey as the best Senator to have emerged from Cross River North because of the unprecedented impact he made within his short stint at the Red Chamber.

According to him, it could only have taken a magician to accomplish such a record feat.

He therefore called on the people of Yache and Cross River State to collapse all structures in support of Odey and the Gov Ben Ayade led APC in the State.

Odey thanked the leadership of the Party for receiving him with an open arm.

He thanked his supporters in Yache and beyond for willingly accepting to defect with him to the ruling APC.

He said his decision to join the ruling APC was for the interest of the people he is serving because service to the people is not about the political party one belongs.

“My policy and my lifestyle is to serve my people and not for my selfish gains.”

He therefore called on the people to join ranks with APC, the party at the centre to experience meaningful development and to continue to follow Governor Ayade who has remembered Yache and Yache people.

Deputy Governor Prof. Ivera Ejemot Esu, described Odey as a man who is known for his exceptional humility and unassuming lifestyle.

“Anybody who is intelligent and well-read but wants to be loyal must learn the act of humility”.

He, therefore, called on the people to continue to support Sen. Odey and Governor Ayade’s administration to take Cross River State to an enviable height.

High point of the occasion was the handing over of the party flag and other insignia to the Senator by the Deputy Governor, Prof. Evera Esu.