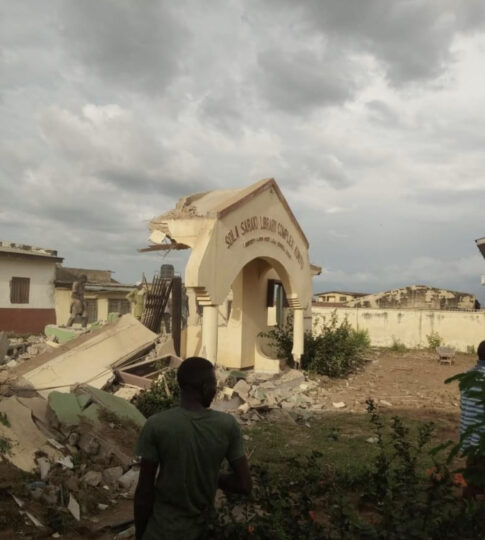 Former Senate President Bukola Saraki and his sister Gbemisola appeared to have misfired in attacking Governor Abdulrahman Abdulrazak over the demolition of a library in Ilorin on Tuesday.

The said library was named in honour of their late dad Senator Olusola Saraki by Ilorin West Local Government.

It was bulldozed Tuesday.

The Sarakis, with apparent axe to grind with Abdulrazaq, after he also demolished Ile Arugbo, owned by their dad, seized on the library demolition.

Bukola fired the first missile at the governor.

“I just got the news that the major official assignment carried out by the Governor of my state, Kwara, today, is the demolition of an old public library named after my late dad, Dr. Olusola Saraki. May Almighty Allah continue to retain a place for Oloye in Aljannah Firdaus,” he wrote.

Gbemisola, his sister, who is the minister of state for transportation, also condemned the demolition of the library, saying the state government’s focus is not to build the state.

She said: “Yet again, today we find that the Governor of Kwara State’s focus is not on building up Kwara, but on demolishing buildings which were owned or named after my late father the Waziri of Ilorin.

“No matter how many structures are demolished, Baba Saraki’s legacy can never be destroyed, because it lives in the hearts and minds of the great people of Kwara.”

[The library before demolition:

The council said the building was pulled down after community representatives led by Mallam Abdulganiyu Salihu Onifila “cried out to the council to come to their aid by making use of the place for the betterment of the community and local government at large.

In a statement, the chairman, Mukhtar AbdulGafar Omotosho gave the background to the demolition and slammed the criticism by the Saraki as sheer misinformation.

Omotosho said the library had been in a state of horrible disrepair over the years and was serving as a haven for criminal elements, thereby posing threats to public safety.

“Our attention has been drawn to what seems like a deliberate misinformation by some idle hands on the planned renovation of one of our properties at Ilorin West Local Government named after the late Olusola Saraki.

“The said dilapidated and vandalized property belongs to the people of Ilorin West. In other words, it is a public library constructed with public funds but named after the late politician. Community representatives led by Mallam Abdulganiyu Salihu Onifila cried out to the council to come to their aids by making use of the place for betterment of the community and local government at large.

“This property, long in disuse, had been in a state of horrible disrepair over the years and was serving as a haven for criminal elements, thereby posing threats to public safety.

“Since our coming on board, we have received several public appeals to do something about the dilapidated structure to give it a face-lift and put it to good public use.

“It is against this background that we have saved up to rehabilitate the facility by making it an ICT Centre/e-Library for public use, especially in this age of information communication technology.

“To begin this work, the old structure needed to give way, hence the demolition and packing of same that began last week.

“We wish to emphasise that this is a public facility owned by the Ilorin West Local Government. Naming it after the late politician was simply honorary.

Omotosho said the new library will retain its old name when completed.

“The local government recognises the need to give honour to whom it is due. The facility will retain the honorary name after the rehabilitation, just like we have other public facilities named after eminent Kwarans, late or alive. We do not see any need for anyone to play cheap politics with the action of the local government over its own property”, he said.