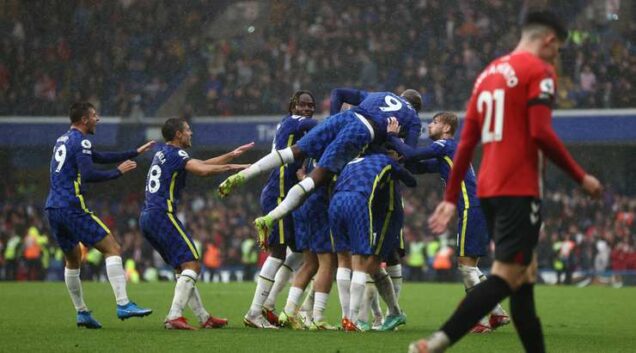 After two consecutive defeat, Chelsea bounced back on Saturday to thrash 10-man Southampton 3-1 at Stamford Bridge to go top of premier league.

The homers lost at home to Manchester City last weekend and to Juventus mid-week in a champions league game.

Chelsea capitalised on a red card to Southampton’s James Ward-Prowse on 77th minute to take charge of the game as before then, it was 1-1.

The Londoners opened scoring on nine minutes through Trevoh Chalobah.

A corner was taken and Ruben Loftus-Cheek won a simple header before Trevoh Chalobah nodded the ball into the back of the net.

James Ward-Prowse drew Southampton level on 61 minutes, winning the battle of wills and sent an unstoppable penalty past Edouard Mendy into the bottom left corner.

After Ward-Prowse was sent off, Chelsea quickly took charge, with Timo Werner scoring the second goal, after unleashing a first-time shot from inside the box and beats the goalkeeper low inside the middle of the net.

The homers compounded Southampton’s woes as Ben Chilwell fired in the rebound into the top left corner after the ball broke to him in the box to make it 3-1.