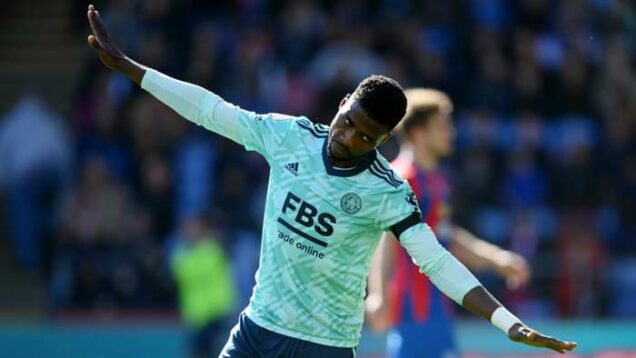 Kelechi Iheanacho, who clocks 25 today, found the net as Leicester City settled for a draw against Crystal Palace in Sunday’s Premier League outing.

Iheanacho was handed his first English elite division start of the 2021-22 campaign, partnering with Jamie Vardy in a 4-4-2 formation.

To justify his inclusion in Brendan Rodgers’ line-up, the Nigerian international put the Foxes ahead in the 31st minute at Selhurst Park.

He pounced on a heavy touch by Denmark international defender Joachim Andersen, headed for goal before slotting it into the bottom left corner of goalkeeper Vicente Guaita.

While the hosts were still trying to recover from the setback, Leicester doubled their advantage six minutes later through Vardy after he was teed up by Harvey Barnes.

In the second half, Patrick Vieira’s men stepped up their game to reduce the deficit through super-sub Michael Olise.

With his shot off Tyrick Mitchell’s cross initially blocked, the 19-year-old winger of Nigerian descent smashed home the rebound past goalkeeper Kasper Schmeichel.

The keenly contested encounter ended on a no-winner, no vanquished note as no goals were scored in the remaining minutes left.

Iheanacho was replaced in the 71st minute by James Maddison while Senegal prospect Boubakary Soumare came in for Hamza Choudhury on the hour mark.

For Palace, Wilfried Zaha – who was making his 401st appearance for the club was in action from start to finish, with Jordan Ayew coming off for Olise.

Regardless of the result, Iheanacho’s goal is a warning signal to the Central African Republic ahead of this month’s double-header 2022 Fifa World Cup qualifiers.

Goal reported that he is part of Gernot Rohr’s squad to face coach Raoul Savoy’s Wild Beasts in Lagos on October 7 before heading to Stade Barthelemy Boganda three days later.

Victory in both games will take them a step closer to the all-important knockout rounds that will produce Africa’s five flagbearers in Qatar.

On return from international duty, Iheanacho is expected to face Manchester United in a league outing on October 16 at the King Power Stadium.