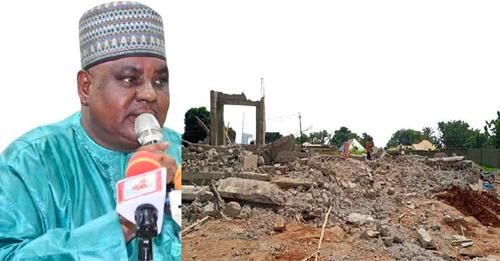 The Bauchi State Government on Monday said a house, belonging to a member representing Bauchi Federal Constituency in the House of Representatives, Yakubu AbdullahiYakubu Abdullahi, was demolished because due process was not followed.

The government said the building was also being used by criminals as a hideout.

Abdullahi had alleged that Governor Bala Mohammed ordered the demolition of his house located at No. 7, Buba Yero Road, Old GRA, for “political reasons.”

However, the Special Adviser on Media and Publicity to the governor, Mukhtar Gidado debunked the allegation in a press conference on Monday.

He said that there was an existing policy of the state government that allows, subject to the governor’s approval, for some of its residential houses to be sold to their occupants on owner-occupier basis, adding, however, that government houses along Buba Yero Road, Old GRA, Bauchi, popularly referred to as the Commissioners’ Quarters, were exempted from the policy.

According to him, the said house was allocated to the State House of Assembly to serve as a guest house on 23rd June 2014.

“In spite of the exemption of houses along Buba Yero Road, from the Owner-Occupier Policy of the State Government, the then Commissioner for Works, Land and Housing under the past immediate administration, Abubakar Tatari-Ali, allocated the house to himself.

“The house was later sold to Yakubu Abdullahi at the cost of N9m. Despite violating the government policy exempting the house from the owner-occupier scheme, there was no record either in the treasury or Ministry of Housing to show that the amount was paid into government coffers.

“Not only that, the whole process of the purported sale of the house did not follow due process because the value of the house was not assessed by relevant government agencies and approval of the State Chief Executive was not obtained,” he said.

Gidado said that following the purported sale of the house to the lawmaker, the state House of Assembly wrote to inform the government on 28th October 2019 about the development since the house had earlier been allocated to them to serve as a guest house.

“The state judiciary had also, on 17th February 2021, written to inform the government that the house was being used as a hideout by criminal elements. These criminal elements have been terrorizing residents of the neighboring houses.

“Upon receipt of the reports of the State House of the Assembly and the judiciary, government-directed its relevant agencies to investigate the matter and, in the course of the investigation, it was discovered that Hon. Yakubu Abdullahi had demolished the main building and had commenced the construction of a new structure at the site.

“A Notice of Revocation was served on Hon. Yakubu Abdullahi on 21st and 23rd September 2021 in respect of the Certificate of Occupancy fraudulently granting him ownership of the property by the then commissioner of Works, Land and Housing, Abubakar Tatari Ali,” Gidado added.

“The media aide said that the revocation notice was duly acknowledged, and in spite of this, Abdullahi continued with the construction work on the site, adding that, consequently, the State Development Board marked the building for “Stop Work Order” on 27th September 2021 which he did not comply with.

He said that a team of state government officials led by the Secretary to the State Government went to the site on 29th September 2021 to confirm the development and, “upon reaching the site, the team confirmed the construction work and was confronted by one Ibrahim Ago who threatened fire and brimstone, insulted and threatened the officials,” he said.

Gidado said that an emergency security committee meeting under the chairmanship of the SSG was convened immediately to discuss the development; and that, “in compliance with the resolution of the security committee, a team was sent by the state government on 30th September 2021 to demolish the illegal structure.”

Reacting to the claim by the lawmaker that four of the security men guarding the house were shot and taken to the hospital where the bullets were removed, Gidado said, “On reaching the site, the team was confronted by thugs hired by Hon. Yakubu Abdullahi and led by the said Ibrahim Ago. The thugs fired at the team who had to withdraw, to avoid casualty.

“On 1st October 2021, the government again lodged a complaint with the Police on the presence and activities of heavily armed hoodlums at the site right behind the Government House. Later that evening, the illegal structure was demolished by the state government.”

He warned that “the government will not allow anybody, no matter how highly placed, to compromise this standard and those that seek to dare the government does so at their own peril.”