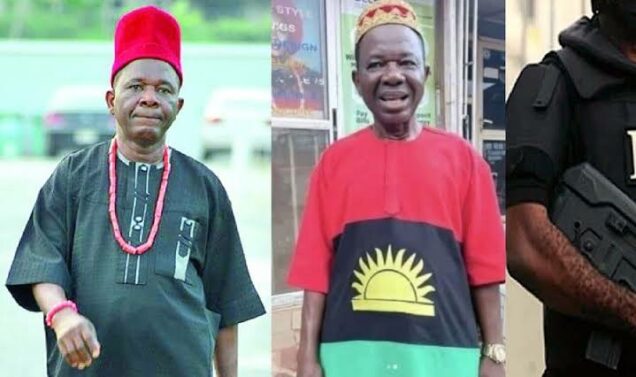 Chiwetalu Agu, the veteran actor, who was arrested on Thursday in Onitsha by the Military because he wore a Biafran outfit, is not one of the run-of-the-mill thespians who parade the Nollywood landscape. Nigerians have started begging for his release.

He has a lot of traits going for him. When he cracks a joke, he maintains a serious mien, even when those who watch him bend double with glee. Also, he has a unique way of making non-Igbo people pick the language when he talks in movies. In other words, he switches codes intermittently from English to Igbo. Imara ma, ahorom ginayan, iburibu (You are fine, I love you, you are fat, in that order).

He plays the bad guy also. That is an uncle who appropriates the belongings of his late brother, not minding the excruciating suffering the fatherless children would go through. Or he can play the role of the typical village drunk or he-goat whose pastime is to go after widows for romance…Not a few Nigerian movie aficionados love him. He has a unique way of achieving verisimilitude.

So, when he was reportedly beaten and arrested by soldiers at Upper Iweka in Onitsha, Anambra State for wearing an outfit made from the Biafran flag, Nigerians begged the military for mercy.
This was contained in a video that went viral on social media, where a man narrated that the actor had stopped at a market in Onitsha “to buy bread when he was attacked by soldiers who beat him up for his Biafran outfit.”

An insider quoted by The Guardian disclosed that the national president of the Actors Guild of Nigeria Emeka Rollas has been notified of the arrest and is ‘currently on the matter’. “Our source also said that the actor has been moved from 302 Onitsha Cantonment where he was previously detained to 82 Division in Enugu. The actor recently shared a photo of himself dressed in the Biafran flag outfit as a sign of solidarity for the Indigenous People of Biafra.”

Emeka Ike, another actor wrote on his Instagram page: “Release all victims of conscience immediately. Your belief is you. Your ideology is you. Tyranny never pays. Dialogue is golden. Release Sunday Igboho, release Mazi Nnamdi Kanu. immediately. The world is watching.”

The President of the Actors Guild of Nigeria, Emeka Rollas said that the Guild is doing everything possible to ensure Chiwetalu Agu is released. “I don’t know why he put on Biafra regalia. The state is hot. We are in talks with the military officials to ensure he his released. I heard they have taken him to the 82 Division of the Nigeria Military base. We will do our best.”

Agu’s arrest was confirmed in a statement signed on Thursday by Brigadier General Onyema Nwachukwu, Director of Army Public Relations. He wrote: “Troops of Nigerian Army (NA) have arrested one Chiwetalu Agu while inciting members of the public and soliciting for support for the proscribed Indigenous People of Biafra (IPOB).

“Though he attempted putting up some resistance when troops made efforts to take him into custody, he was not assaulted or subjected to brutalization.
“While the NA recognizes the inalienable rights of the citizenry to freedom of movement and expression as enshrined in the Constitution of the Federal Republic of Nigeria, it is apparently a violation for any individual or group to incite the public to cause mayhem or break down of law and order.
“It is, therefore, pertinent to state that while exercising such freedoms, it must be done within the confines of the law, bearing in mind the imperative for peace, and national security.
“For the avoidance of doubt and emphasis, the Indigenous People of Biafra(IPOB) remains proscribed. Therefore, any individual or group seen to be projecting and advancing the cause or activities of the group is viewed as brazenly challenging the constitutionality of the Federal Republic of Nigeria.
“More worrisome was the fact that considering the prevailing security situation of the region, coupled with the ongoing Exercise GOLDEN DAWN, his action could be a tacit endorsement and support for the proscribed group. We have all witnessed the activities of the group take a violent dimension in recent times.
“Chiwetalu Agu has clearly demonstrated uncharitable disposition to negate peace and security in the region, hence, he is taken into custody for preliminary investigation. It is important to once again place on record that the allegation that he was brutalized is false and should be disregarded accordingly.
“While the NA would not allow IPOB and its sponsors to hold the region captive and allow the security situation to degenerate, it is instructive to restate that national interest supersedes any parochial consideration. Individuals or groups who fan the embers of violence are warned to desist or face the consequences of their actions. The ongoing Exercises are on course and will rid the region of all forms of criminality.
“The peace-loving and law-abiding people of the South East are enjoined to please go about their normal activities, as efforts are ongoing to bring perpetrators of violence to book. They are equally urged to continue to support the security agencies to restore normalcy to the region in furtherance of peace”.
However, Agu reacted that he was sharing bread to hungry Nigerians and not demonstrating for anyone to join Biafra. He added: “What I’m wearing is a civil dress. This is not Biafran wear it is a rising sun and not an eastern security outfit. I know where to go with this outfit.
“This sun on the dress I’m wearing is just a rising sun because I believe I must rise.
“I was sharing bread when they came to arrest me, I was not organising any demonstration. Is it wrong to feed the hungry Nigerians?”