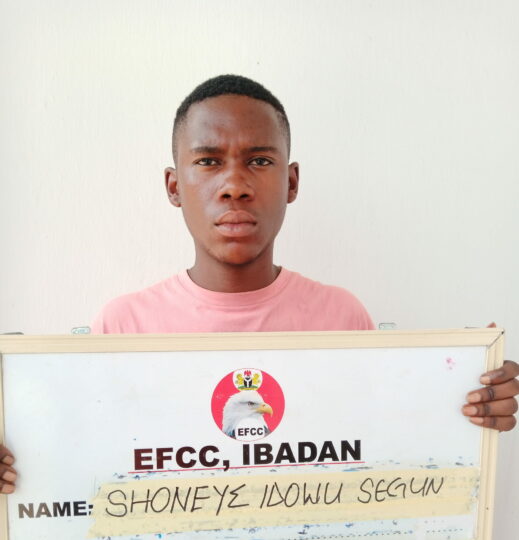 A student Shoneye Idowu Segun has been sentenced to one year in prison for impersonation, by Justice Uche Agomoh of the Federal High Court sitting in Ibadan, Oyo State.

Shoneye was jailed on Tuesday for an offence which contravenes section 33 (2) (b) of the Cybercrime (Prohibition, Prevention, etc) Act, 2015 and punishable under Section 33 (2) (c) of the same Act.

Shoneye, who claims to be a student of marketing from Ogitech Polytechnic, was convicted after pleading ‘guilty’ to one-count charge bordering on impersonation.

The charge read: “That you Shoneye Idowu Segun sometimes in 2020 at Ilaro within the jurisdiction of this Honourable Court did fraudulently impersonated the name – Anna Balogun from Texas, United States of America with intent to gain advantage for yourself and thereby committed an offence contrary to section 22 (2) (b) of the Cybercrimes (Prohibition, Prevention, etc) Act, 2015 and punishable under Section 22 (2) (b) of the same Act”.

In view of his plea of ‘guilty’, prosecution counsel, Sanusi Galadanchi reviewed the facts of the case and urged the court to convict and sentence Shoneye accordingly.

He is also to forfeit his iPhone 11Pro Max and one iWatch to the federal government of Nigeria.