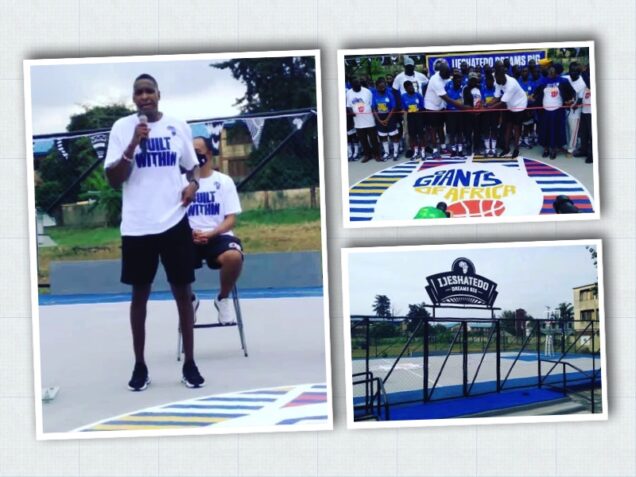 Masai Ujiri, the Proprietor Giant of Africa Basketball Foundation, on Wednesday, announced his determination to build no fewer than 100 basketball courts across Africa.

Ujiri stated this in Lagos at the unveiling of the newly built Basketball Courts at Ilupeju Grammar School and three others.

Earlier, the same ceremony was held at the Ijeshatedo Grammar School, Oworonsoki Community Park and the Ilupeju basketball courts currently used by the Warriors Basketball Club.

An elated Ujiri said that the essence of providing the basketball courts was to nurture talents and develop future champions for Nigeria and the rest of Africa.

“It’s a great day for us, because this has been in the pipeline for many years; we want to use the opportunity to reach out to many youths who love basketball.

“We are also taking the initiative to other African countries like Burkina Faso, Cote D’Ivoire, Senegal and beyond,’’ Ujiri said,

He said the numerous schools on ground would play the game and take part in competitions that would sharpen their skills and broaden their knowledge of the game.

“We are delighted to bring infrastructure like this closer to the young budding pupils, as they would be motivated to get in the courts and practice and develop in the game.

“We want to focus on infrastructure, building basketball camps, and also we are focusing on the Giant of Africa Festival coming up next year in Rwanda,’’ Ujiri said.

Kanu Nwankwo, ex-Nigeria international football player, who was a surprise invitee to the ceremony, expressed his happiness over Ujiri’s initiative.

“It’s a great thing for us to see this kind of development, as it would go a long way in encouraging passionate basketball players to love the game and work hard.

“The youths do not have any excuse but to practice and put in their best, to grow in the knowledge of the game, indeed it is a great development for Africa and I am proud to be here.

“One day, we would celebrate a player or even many players developed on this court and I urge the players to seize the opportunity that they have,” Nwankwo said.

Afro-hip hop sensation David Adeleke, popularly called Davido, was also a guest at the unveiling ceremony and he was full of praises for the Giant of Africa Foundation project.

”I am delighted to be here indeed, building infrastructure like this would go a long way in developing budding talents that abound.

“Personally, I have always believed that it is not everything we have to rely on the government and I’m proud to be here today to give my support.

“I hope we can have many more good people like Masai Ujiri doing great projects in sports as we need people like him investing in music and other sectors that can develop Nigeria’s Youths,” Davido said.

The Onipeju of Ilupeju, Chief Bisade Philips, who was also a guest at the unveiling ceremony, said he was very happy at what was happening before him; delighted to be at the event to witness the ceremony himself.

He eulogised the proprietor of the Giant Of Africa initiative as he believed he would bring greater development to basketball and to the community as a whole.

Ujiri, a former national team player, became a scout in 2002, first for the Orlando Magic and then the Denver Nuggets of the US, in the National Basketball Association (NBA).

He worked with the backroom staff of Toronto Raptors of Canada, rising to the ranks of General Manager of Denver Nuggets and contributing to the development of the game in several places, while scouting for players for various clubs.

He is currently the Vice Chairman and President of Toronto Raptors Basketball Club of Canada where, with his leadership skills, he helped the team win their first ever NBA championship trophy in 2019.