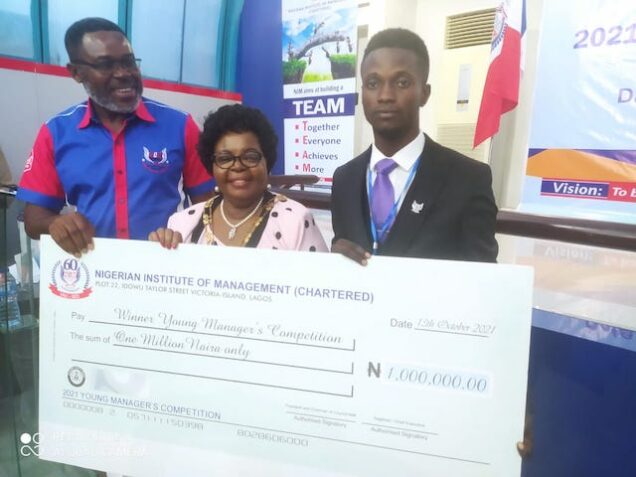 Adegoke won N1 million at the competition which held on Wednesday in Lagos with the theme: “Propelling the Nation’s Youth to Greatness”.

NIM Young Managers Competition (YMC) is one of the institute’s corporate social responsibilities and contributions to youth development and empowerment.

It is an annual competition established in 1974 to encourage practising young graduate managers, between the ages of 25 and 40 years, endowed with creative and research ability, to hone their skills in conducting independent in-depth research.

She noted that the YMC had over the years created a crop of young men and women who have distinguished themselves in conducting studies in different areas of human endeavours.

She added that a total of 456 young managers (men and women) obtained the application forms and participated in an online qualifying test this year.

Anabor revealed that at the end of the online (G-MAT and Management) test, the top 15 were taken through the second round and the best nine were then selected via a video presentation assessment and brought to Lagos for the final stage of the competition.

“Another is Dr Lucy Newman, the immediate past Managing Director of Financial Institutions Training Centre (FITC) among others.

“The nine contestants, after rigorous, demanding and painstaking tasks in the last four days have been pruned down to five for today’s grand finale.

The NIM President disclosed that the institute’s plan is to expand the scope and duration of the competition to make it the best intellectually-based and most sought-after management reality show in the country.

The second runner up got N300,000 and Management Training at NIM valued at N150,000 respectively.

Also, the third runner up alongside others will receive N50,000 consolation prize each.