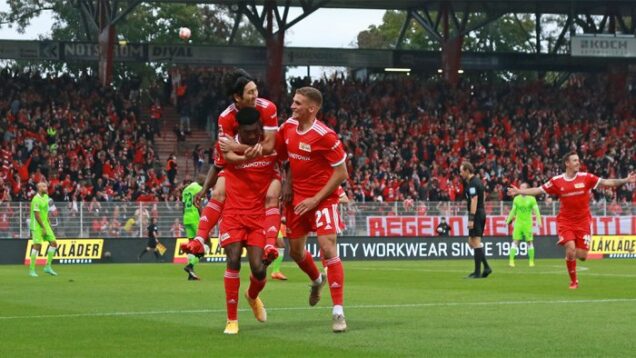 Taiwo Awoniyi scored his sixth goal of the season to help Union Berlin swap places with Wolfsburg in the table with a 2-0 win in the capital, taking Urs Fischer’s men fifth in the standings.

The international break was an opportunity for a reset for Wolfsburg coach Mark van Bommel, who had seen his side’s flying start to the season evaporate with a run of five games without a win.

He took a bold decision in leaving Wout Weghorst and Ridle Baku on the bench, and his team had a similar mentality as they took the game to their hosts.

Chances were at a premium, though, and the first real opening was scuppered by Maximilian Philipp, who tried to lob Andreas Luthe after he got caught off his line, but his effort also cleared the crossbar. Neither goalkeeper would actually have to make a save in the first 45 minutes, but that soon changed in the second half.

The hosts went in front within five minutes of the restart. Genki Haraguchi touched Max Kruse’s pass into the path of Awoniyi, who showed exactly why he is rubbing shoulders with Robert Lewandowski and Erling Haaland at the top of the scoring charts with an accomplished finish past Koen Casteels.

Josuha Guilavogui flashed a low shot across the face of Luthe’s goal as Wolfsburg looked to level matters immediately, and Dodi Lukebakio hit the post from close range.

Baku and Weghorst were both sent on by van Bommel, and the latter’s first two touches of the ball almost brought the equaliser, but for a brave double-save by Luthe’s legs. Weghorst sent a free header straight at Luthe as the Wolves doubled their efforts to find an equalizer, but on the break, Sheraldo Becker doubled the hosts’ lead and put the match to bed, nodding in fellow substitute Andreas Voglsammer’s cross.