Kenya, FIFA on collision path over probe into FKF account 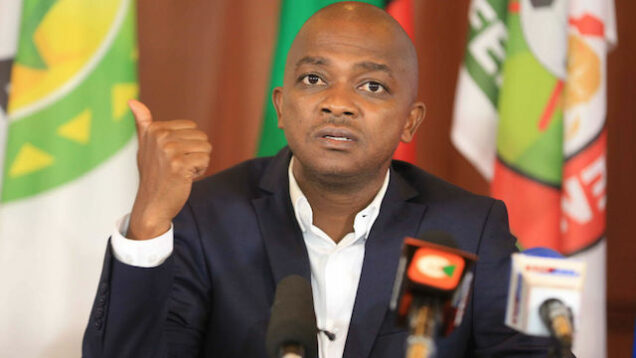 Kenya’s Cabinet Secretary for Sports, Amina Mohamed has ordered an audit into the accounts of the country’s football federation in a move that places the country on a collision path with FIFA.

The announcement comes 24 hours after a court in Nairobi blocked the bid by Football Kenya Federation (FKF) president, Nick Mwendwa to stop the Directorate of Public Prosecutions (DPP) and Directorate of Criminal Investigations (DCI) from investigating and arresting him for misappropriation of funds.

On Friday, Mohamed ordered the Sports Registrar to audit the FKF accounts and prepare a report.

The government is seeking answers to among other things, how 244 million shillings (2.2 million U.S. dollars) that was given to the federation was used to prepare the national team Harambee Stars for the 2019 Africa Cup of Nations (AFCON) finals in Egypt.

The Kenyan official’s order comes days after Kenya’s chances of qualifying for the FIFA 2022 World Cup in Qatar were mathematically ended by a 1-0 defeat to Mali in Nairobi on Monday.

Harambee Stars will also not feature in the Cameroon 2021 AFCON finals which was moved to January 2022 due to the global pandemic after they were knocked out during the qualifiers in March by Comoros Islands.

The result saw Kenyans pile pressure on Mwendwa who had promised Qatar 2022 qualification when he came to power for his first term in 2016- to resign but the FKF chief was defiant.

“The work that needs to be done is that we need to bring the talent to the table.

“For you to win, you need quality players. You guys know Moussa Djenepo, do we have a player like him? Mwenda posed the question in an interview with a local television station on Tuesday.

“We have to build him and that is the reason we are training coaches to go to the grassroots and find our Moussa Djenepo, they can find a (Yves) Bissouma to compete with the likes of Mali,” he added following the Mali defeat.

Mwenda added that even coaches of the caliber of AS Roma’s boss Jose Mourinho and Arsenal Manager, Mikel Arteta would fail in the Harambee Stars job since Kenya “has not developed the talent” to succeed in international football.

The remarks only served to inflame the public sentiment against him as former coaches, retired and current players rounded on the FKF chief who has hired seven national team coaches since he took over.

On Thursday, the High Court of Kenya cleared the path for the prosecution and police to investigate Mwendwa over suspected misappropriation of funds at the federation.

Mwenda had on October 1, 2020 sought to gag the two agencies from investigating him over a complaint to the Banking Fraud Investigations Unit (BFIU) direct transfer of over 90,000 dollars from the federation to Mwendwa’s personal accounts.

Through lawyer Tom Ojienda, Mwendwa sued DCI and the DPP alongside journalist Milton Nyakundi, who had filed the complaint with the BFIU to toss out the petition.

Nyakundi had also separately filed the complaint on July 29, 2020 with the Investigatory Chamber and Ethics Committee of world football governing body.

The complaint was filed under Article 58 (1) of the FIFA Code of Ethics to activate Article 59 of the same to find that Mwendwa had violated the law.

The world governing body is yet to respond and with the latest probe order from the government, Kenyan football is once again facing uncertain times ahead with FIFA’s abhorrence of political interference in the game.