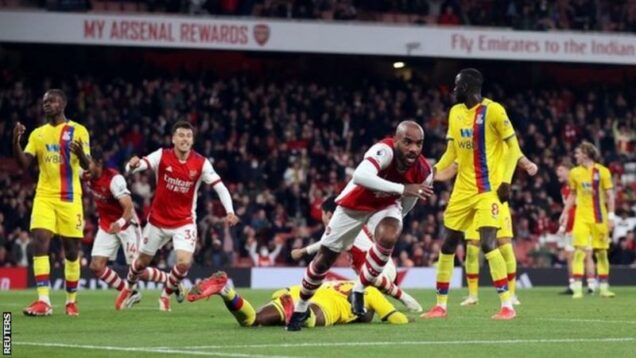 Alexandre Lacazette scored on last minute added time to save Arsenal from defeat at the Emirates Stadium to Crystal Palace on Monday.

The match ended 2-2. Palace were almost running away with victory when substitute Lacazette struck for the gunners to save the day.

He tapped home from close range after the rebound fell kindly into his path on 95 minutes.

Arsenal had opened scoring on eight minutes through Pierre-Emerick Aubameyang.

A rebound had wrong-footed everyone except Aubameyang, who slammed the ball into the open net from close range.

Palace came back into the game on 50 minutes from a Christian Benteke’s goal.

He broke through before collecting a brilliant pass and producing a precise strike to beat the goalkeeper. The ball went into the bottom right corner.

The visitors made it 2-1 on 75 minutes after Odsonne Edouard made a run to receive the ball and produced a powerful shot from mid-range which deflected in off the crossbar, beating the surprised goalkeeper.

Arsenal were heading for defeat when Lacazette came to the rescue.