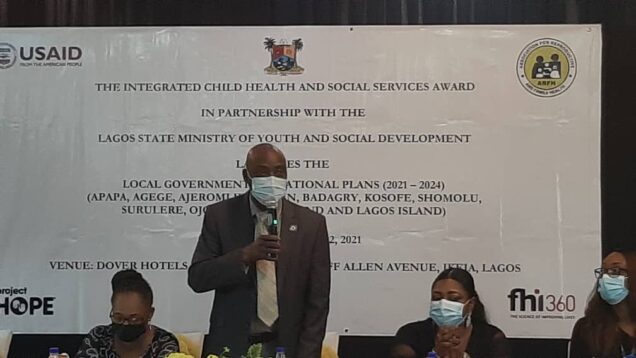 The launch was in partnership with the Association for Reproductive and Family Health (ARFH).

The launch is to ensure that the plight of the downtrodden in the society especially the Orphan and Vulnerable Children (OVC) is ameliorated.

The ICHSSA project seeks to mitigate the impact of HIV/AIDS on vulnerable children and their households,

The Permanent Secretary, Ministry of Youth and Social Development, Dr Olugbenga Ayoola Aina said the initiative wuld be driven by Local Government Operational plan and aimed at improving the lives of orphans and the vulnerable children.

“This launching is aimed at improving the lives of the Orphan and Vulnerable Children (OVC) by delivering essential services to them and their households through the Community Based Organizations(CBOs).

“The Lagos State Government has been in partnership with the Integrated Child Health and Social Services Award (ICHSSA) which is a 5-year PEPFAR/USAID funded project in the State. It has its focus on 10 LGAs in their activities.

“The Ministry of Youth and Social Development in collaboration with ICHSSA 2 project developed and validated the LG OVC Operational Plan.” The permanent secretary stated.

He said that the LG OVC Operational Plan would serve as an advocacy tool to support in negotiating a budget line for OVC activities at the Local Government level which would in turn yield more results and have great impact on the lives of the vulnerable children and their households in the community and the State as a whole.

In her presentation on an overview of the ICHSSA 2 project, the Deputy Chief of Party Ms Faith Lannap said that ICHSSA 2 was a United States Agency for International Development (USAID) five-year funded consortium in partnership with Project Hope, FH1360 and the Lagos State Government and is being implemented by ARFH to mitigate the impact of HIV/AIDS on vulnerable children and their households in ten LGAs.

According to Ms Lannap, the scope of service to vulnerable children and their caregivers would cover Health, Education, Food/Nutrition, Psychosocial, Legal protection, Economic strengthening, Social protection and Household Economic Strengthening.

She disclosed that some of the achievements of ICHSSA 2 includes; OVC enrollment on the Lagos State Health Insurance Scheme, establishment of adolescent and youth friendly centres, distribution of business startup, cash transfer to 2,427 eligible caregivers, 37,037 children (5-17yrs) reached with educational services and distribution of Personal Protective Equipment to health facilities in Lagos during the outbreak of Covid-19 pandemic.