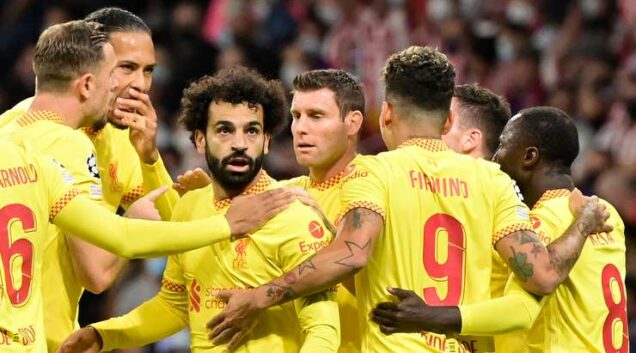 Mohamed Salah made history on Tuesday as he becomes the first Liverpool player to score in nine consecutive matches.

The striker hit a brace in Liverpool’s 3-2 away win against 10-man Atletico Madrid in Spain.

Salah put Liverpool in front on eight minutes, as he wove his way past opponents, and unleashed a magnificent effort from the edge of the box into the bottom left corner.

Naby Keita made it 2-0 for Liverpool five minutes later.

He got to the ball on the edge of the box and fired in a first-time shot without any hesitation. The strike was excellent and went inside the right post.

Atletico pulled one back on 20 minutes as  Koke took aim and his effort deflected off Antoine Griezmann to beat the goalkeeper.

He neatly controlled a decent pass from Joao Felix. He looked up and smashed an unstoppable drive into the bottom right corner from the edge of the box to make it 2-2.

Griezmann then was shown a straight red card on 52 minutes and that changed the pace of the game.

Salah sealed victory for Liverpool on 78 minutes from the penalty spot.