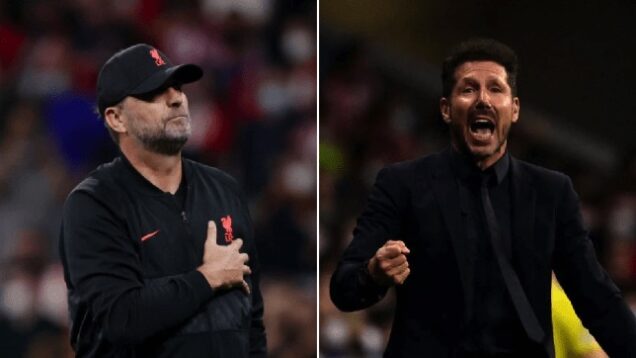 Diego Simeone has defended his refusal to have a handshake with Jurgen Klopp following Atletico Madrid’s 3-2 defeat to Liverpool in the Champions League.

Simeone said the handshake would not have been healthy for either the winner or the loser.

It was a night of high drama at the Wanda Metropolitano, with Mohamed Salah holding his nerve to score a decisive penalty in the 78th minute after Antoine Griezmann was shown a red card.

Griezmann had earlier dragged Atleti back into the contest with a quickfire double in the first half to cancel out goals from Salah and Naby Keita in the opening 13 minutes.

The result saw Liverpool open up a five-point lead over the La Liga champions at the top of the group, but Simeone’s extraordinary behaviour at the full-time whistle dominated discussion after the game.

Klopp – who admitted he did not like Atleti’s playing style in the build-up – looked furious as his counterpart turned down a traditional handshake and instead sprinted straight down the tunnel.

‘I don’t always greet (the other manager) after the game because I don’t like it,’ Simeone told reporters when asked about the incident at his post-match press conference.

‘It’s not healthy for either the winner or the loser. I think of it that way.

‘But now, when I see him, I’ll greet him without a problem.’

The Argentine added: ‘It was a tough match against an opponent who has a great game, who usually wins matches by many goals.

Klopp was upset with Simeone’s behaviour but blamed it on the ’emotions’ that came with a match of such importance in the context of the group.

‘The situation is clear, I wanted to shake his hand and he didn’t want to. His reaction was for sure not right and mine was not too good as well,’ the Liverpool manager told BT Sport.

‘But we are both emotional so when we see each other next time we will shake hands definitely and it’s like nothing happened.

‘He was obviously angry not with me, but with the game, the world and it’s nothing else.’