Why I built new Governor's lodge in Lagos - Fayemi 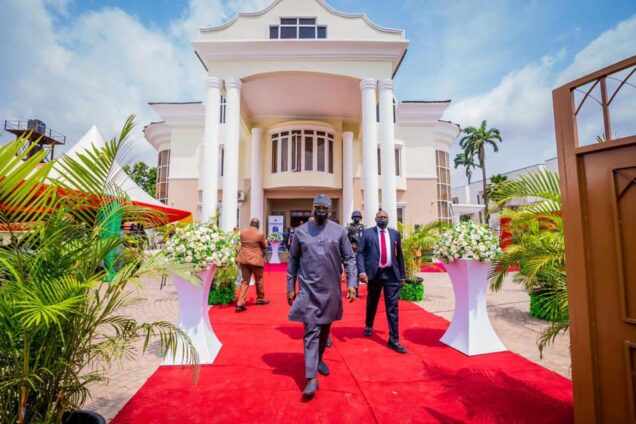 Governor Fayemi has described the new Governor’s lodge/Liaison Office project as well as other projects embarked upon by his administration as a response to the people’s yearnings.

Fayemi stated this at the official inauguration of the newly built Ekiti State Governor’s Lodge/Liaison office in Ikeja GRA, Lagos State on Monday.

The inauguration was part of activities to mark the third year anniversary of Governor Fayemi’s administration.

However, the Governor said the liaison office was not only to establish the presence of Ekiti State in the commercial capital of Nigeria but to use the heartbeat of Western Nigeria to project the image of Ekiti to the World.

Dr. Fayemi said the construction of the edifice was also in furtherance of his administration’s commitment to deepening sub-regional engagements in the context of the Development Agenda for Western Nigeria (DAWN).

Governor Fayemi who noted that Lagos was key to the investment strategy of his administration, added that the office would serve as a communication and contact center for federal, state, embassies, international organizations, and the private sector whose headquarters were in Lagos.

The Governor who place the value of agricultural food consumed on daily basis in Lagos at N5 billion said the discovery led to the establishment of South West Agriculture Company – SWAGCO with other Governors in the South West to harness the opportunities in the market on daily basis.

He mentioned Promasidor, JMK Foods, Ellah Lake, FMS Farms, Dangote as part of the numerous agriculture-related companies headquartered in Lagos that his administration had been able to attract to Ekiti State for investment in agribusiness.

Dr Fayemi explained that the building which was equipped with state-of-the-art facilities would provide conveniences for state officials who would be coming to Lagos for official assignments and would automatically cut the cost of hotel accommodation during such assignments.

He said; “the strategic importance of having this edifice here is enormous. The Office will effectively serve as a go-to place not only for Ekiti indigenes here in Lagos, (and we have many of us contributing significantly to this economy) that require official services and information from Ekiti State Government but also to non-Ekiti indigenes desirous of engaging the State.

“It will also serve as a communication and contact Centre of our State with Federal/ State Government Offices, Embassies, Offices of international organizations here in Lagos as well as private sector players headquartered in Lagos.

“This edifice has state–of–the–art facilities with offices, conference facilities, and living accommodations for the Governor and aides which will save the state avoidable expenses in hotel accommodation every time State officials are in Lagos for meetings and sundry official duties.”

Earlier in his address the Special Adviser on Special Projects, Arc. Tope Ogunleye commended Governor Fayemi for completing the project which was started during his first tenure but abandoned by the previous administration.

He said the initiatives were geared towards improving the Ekiti State’s Gross Domestic Product (GDP) and the quality of lives of the citizens.

Governor Sanwo-Olu who was accompanied to the venue of the commissioning by Niger State Governor, Alhaji Abubakar Sanni Bello, said his recent invitation to Ekiti State to speak at the inaugural edition of the Fountain Summit in Ado Ekiti had exposed him to the various laudable projects Governor Fayemi had executed in the bid to set Ekiti on the path of economic recovery and transformation.

He said: “At that conference which was the first in the series, I was privileged to see and to hear all of the laudable initiatives that our Governor in Ekiti State has done. It became clear to me that Ekiti was on the path of becoming one of the critical states in this country because indeed the GDP of Ekiti as small as it might be; EKiti is indeed big enough to be a country of its own.”

He lauded the determination of Governor Fayemi to ensure that all abandoned projects were completed during his tenure, even as he hailed the cordial relationships that exist between Governors in the country as demonstrated by the attendance of Niger State Governor Sanni-Bello at the event.

Also in attendance were members of the Ekitiparapo, Lagos State Chapter and representatives of Ekiti students in Lagos State among others.