BBNaija ex-housemate Omashola on the streets unkempt, some joke or real? [Video] 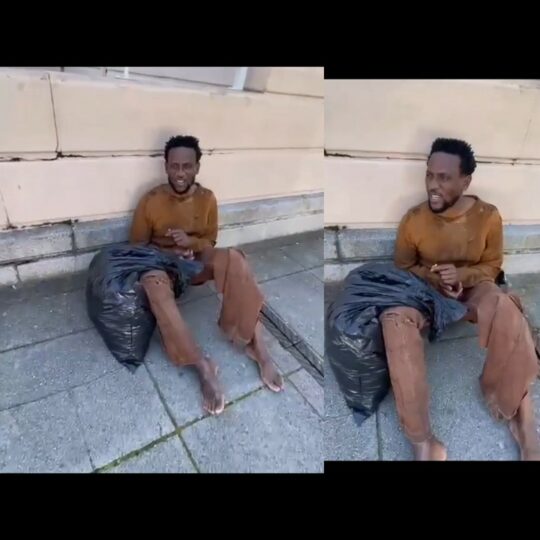 Combo image of Omashola in the trending video

Is a trending video on Omashola Oburoh, former Big Brother Naija Pepper Dem Gang housemate, some kind of macabre joke or a skit?

The video said to have been shot in South Africa shows the reality star dishevelled, wearing a torn pant, his hair unkempt, sitting on a street pavement.

He has a black nylon bag by his side.

And it surfaced a day after he wrote on Instagram that he was near breaking point.

“They say in your youth, depression is mostly peer pressure and the strife to not want to be left behind. In old age, depression is a bucket full of regrets and it is worse than the former.

“Thank God I’m still young but plenty pressure man dey face. I believe in myself normally based on who I be and it is me and my team till the wheels fall off but right now ehn, only God fit understand…. I’m lonely in a world surrounded by people. 😩
.
“Trying to keep my cool but slowly reaching my breaking point 💔”, he wrote.

Just some few days earlier, he urged his 1.1 million fans not to miss an episode on @dance_africa_dance.

The picture he posted along with it, showed him exuberant, wagging the V-sign with his fingers. And there is a beautiful babe, sitting next to him.

A day after, he posted a video of where he demonstrated some dance steps to justify why he was made a judge on @dance_africa_dance.

And then, bang, Omashola on the streets, like a madman.

“I just hope this is some sort of skit or movie @sholzy23 After seeing your last post, should I be worried? You haven’t been active on social media since your last post…call me!”, wrote fellow housemate Ike Onyema.