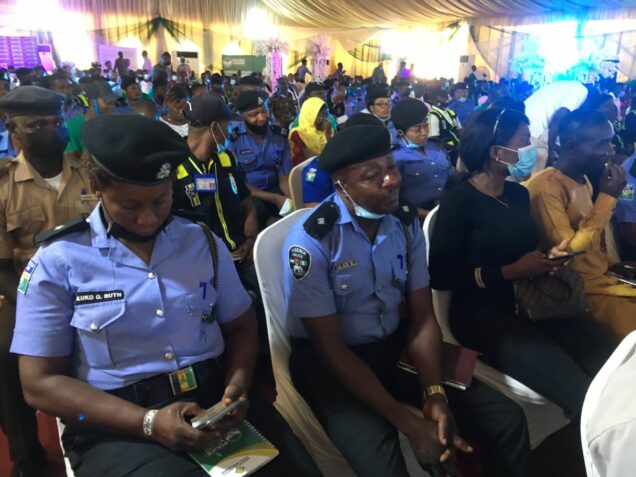 A cross-section of pollice officers in attendance at the event.

The state government organised the session as part of the efforts to bridge the communication gap and strengthen the relationship between law enforcement personnel and young people in the state.

The Interactive session which was organized by the Ministry of Youth and Social Development with the theme: “Strengthening Police and Youth Relationship in Lagos State”, is a platform to repair the mistrust between the police and youths, as well as, restore confidence among these important groups.

According to the Commissioner for Youth and Social Development, Mr. Olusegun Dawodu, the programme became necessary following the discord between both groups.

He said: “Most young people have oftentimes complained of having been denied their basic rights such as the right to live, freedom of movement, speech, association and expression by the actions of the law enforcement agents especially our hardworking Police officers.”

He also explained that young people are sometimes labelled troublemakers when their strength and energy are not channelled to positive use, hence, making the law enforcement officers sometimes see young people as a problem to be solved.

Dawodu, while describing the youths as very pivotal in the making of a greater Lagos, also attributed the police as one of the bedrock in ensuring that the lives and properties of the citizens are protected.

It is in this vein that he emphasized the need for a cordial and long-lasting relationship between both parties, in ensuring that we have a Crime-Free Lagos, where the youth can contribute their quota into the development of the state and country as a whole.

He revealed that young people in the state have a collective responsibility to obey and uphold law and order, thereby shunning crime and violence in all forms.

The Commissioner also stressed that government will not tolerate disobedience of the law, sexual abuse, domestic violence, human trafficking, kidnapping, destruction of Private and Public properties, organized crime, cybercrimes and all forms of criminal activities.

He said that “the Sanwo-Olu administration is youth-friendly and has embarked on the implementation of series of youth engagement activities and programmes through its various Ministries, Departments and Agencies (MDAs), which are geared towards promoting Youth inclusion in the economic development of the state and for their personal development”.

While commending police officers for continuously working to keep everyone safe, he also commended the youth in the state for maintaining peace and working hard to achieve greater strides in various life endeavours.

Dawodu then implored both parties to build a better understanding of themselves and also strengthen their relationship towards the cause of achieving a Crime-Free Lagos.

He, however, reiterated the government’s commitment to create an enabling environment and policies that will ensure the youth have safe space to thrive and reach their full potential.

The Commissioner further assured the police of government’s assistance and support, directly and through the State Security Trust Fund, in the discharge of their duties and regarding their personal welfare.

In response, the Commissioner for Police, Hakeem Odumosu described the youth as the majority population who are vital tools in making the nation greater.

It is in this regard that he revealed that the police force as posited by the law is saddled with the responsibility of ensuring that everyone is protected.

He disclosed that the police force has continued to organize various training and workshops to upskill officers in order to discharge their duties diligently, as well as, interact better with members of the public.

Odumosu further revealed that the force in its part always engages the youth through social media interaction and also sensitizes them on the need to be security conscious.

He then promised that the police force will work diligently and responsibly in enforcing the law, thereby ensuring that we have a Crime-Free environment.

Speaking earlier, the Permanent Secretary for Youth and Social Development, Dr. Olugbemiga Aina stressed that the gathering is an opportunity for the youth and police to discuss their differences and grievances amicably, in order to improve the security situation in the state and prevent future face-off.

Aina represented by the Director of Youth, Mr. Olufemi Adetoye further explained that the platform will avail the Police Command to explain its operation and principles to the youth, enlighten them on what constituted criminality, establish an effective communication channel and clear all doubts about its integrity and effectiveness.

Speaking as the Keynote speaker, the Team Lead of Edgeforth Business Solutions, Mr. Sheriff Adekoya advised the police force to intensify communal engagement and engage influential youth in the neighbourhood as part of measures in effectively discharging their duties.

He also urged the youth to be empathetic, super friendly, intelligent, be well presented and represented, as well as avoid subjective sentiments while interacting with the police force.

Similarly, the discussants ranging from highly profiled youths advised that both parties should have respect for each and relate with mutual trust and regards.