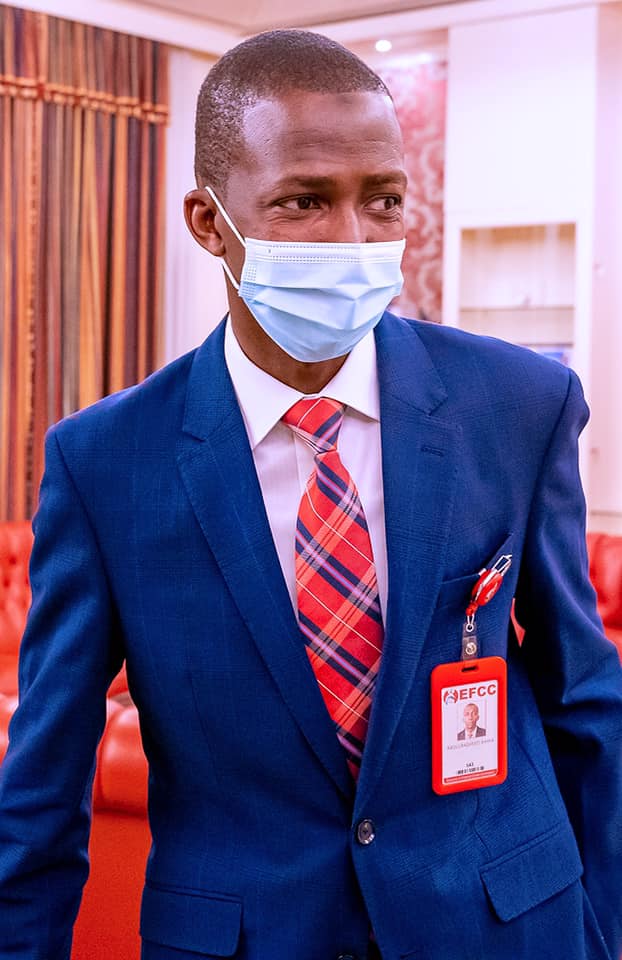 Bawa at the State House

Controversies over alleged illness of Abubakar Peters from COVID-19 stalled the cross-examination of the Chairman of Economic and Financial Crimes Commission (EFCC), Mr Abdulrasheed Bawa, in a case of N761 million oil subsidy fraud was stalled on Monday due to the defendant’s absence.

Peters is standing trial along with his company, Nadabo Energy Ltd. in the oil subsidy fraud suit.

Bawa is a prosecution witness in the case before an Ikeja high court.

However, his counsel Mr E.O. Isiramen told the court he has contracted Coronavirus and is in an isolation centre at the start of proceedings on Monday.

“He is ill with coronavirus. He tested positive for the virus and he is at an isolation centre where he is receiving treatment,” Isiramen said.

Justice Sedotan Ogunsanya, however, asked the defence counsel to be specific on the isolation centre.

“There are several isolation centres, moreover, there is no medical report before the court,” Ogunsanya said.

In response, Isiramen said, “I don’t know precisely where he is, the report was sent via email.”

Expressing surprise, the judge said that the court was a “court of records not of speculation”.

In his submission, prosecution counsel, Mr Seidu Atteh, told the court that the same reason was given for the defendant’s absence in another fraud case against him before Justice Christoper Balogun of a Lagos high court sitting in Ikeja.

“Over a month ago, the defence gave the same reason for the absence of the defendant and the court ordered the defence to serve the prosecution with a copy of the medical report, but till now, we have not been served,” he said.

Consequently, the judge held that the defence was wasting judicial time.

“The court is very displeased with you. Why not inform the court before now? You are responsible for bringing him to court, and this is the only matter listed. This is not a civil matter, but a criminal matter. The court would have revoked the bail but for the illness. No bench warrant for now,” she said.

The prosecution counsel asked the court to impose a penalty on the defence and order it to produce a medical report to support its claim.

However, the judge gave the defence a seven-day period to provide the medical report to the prosecution and the court.

She ordered that the defendant should pay N309,000 within seven days to offset the costs incurred by two witnesses (Bawa inclusive) for the prosecution brought to court from Abuja for the matter.

In his evidence-in-chief during the last court proceedings in the case on Sept. 22, Bawa said that EFCC received petitions from the Ministry of Petroleum Resources and some concerned Nigerians in 2015, alleging fraud in the subsidy regime.