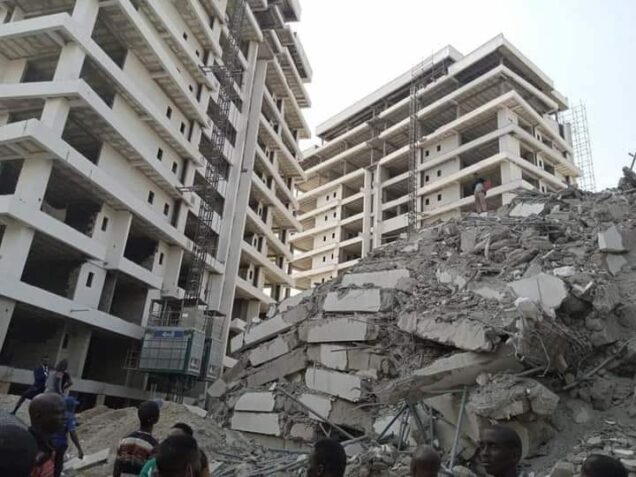 Lagos4Lagos Movement, a group within the Lagos State chapter of the All Progressives Congress (APC), has called out Governor Sanwo-Olu over the collapsed 21-story building in Ikoyi on Monday.

Dr Olajide Adediran, the convener of the group, said the disaster was avoidable, saying “the sad incident is one too many”.

He called out the state government on the poor monitoring of agencies under its watch, resulting in the incessant collapse of buildings in Lagos.

“This is a pointer to the high degree of disregard for due diligence and compliance with standards by the government which continues to put the lives and properties of Lagos residents at risk,” he said.

He admonished the independent panel of inquiry, set up by the government, to look into the immediate and remote causes of the collapsed building.

The APC chieftain added that the panel should also investigate the claims and counterclaims by the suspended LASBCA general manager and that of the Deputy Governor, Dr. Obafemi Hamzat, on the approved floors for the building.

“It is not just fair enough to suspend the general manager. Are we saying the GM who issued the approval for the building didn’t know what he approved or what?

“There is more to this and we believe only a truly independent panel of inquiry can do justice to this,” he said.

Recalled that the LASBCA boss had earlier on Monday said that the owner of the collapsed 21-storey building, under construction in Ikoyi, was given the approval to construct only 15 floors.

However, Hamzat, while addressing journalists at the site of the collapsed building on Tuesday morning, revealed that the owner of the building got approval for 21 floors.